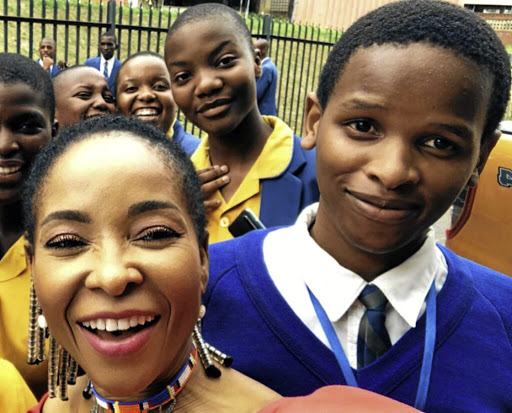 Nhlakanipho Sibiya made the decision to study at University of Cape Town after meeting Prof Mamokgethi Phakeng at his matric awards ceremony./ SUPPLIED

When Nhlakanipho Sibiya met Professor Mamokgethi Phakeng at his matric award ceremony in Durban last month his mind was swayed to enrol with the University of Cape Town.

Sibiya, 18, had initially been accepted at the University of Johannesburg to study BCom financial accounting but Phakeng, who helped him navigate UCT's admissions process, won him over.

Sibiya of Umlazi in Durban, was one of the top matric pupils at Velabahleke High School and had applied to both UJ and UCT.

Two weeks after meeting Phakeng in Durban, Sibiya travelled to Cape Town and to his surprise, the vice-chancellor was waiting to welcome him at the bus terminal.

"I was very nervous about moving from home but I'm learning independence and enjoying life at residence. The professor's welcoming was an overwhelming experience.

"Meeting her helped me to make a solid decision just four days after our motivational chat," Sibiya said.

"I had been struggling to accept UCT's offer online so I decided to accept the first university that accepted me. After talking to the professor she assisted me... I had initially wanted to go study there for my BCom."

I met Nhlakanipho in KZN recently & he had a UCT offer but accepted an offer from another varsity. We had a chat & when I got back to CPT he slid into my DM on insta telling me he changed his mind. Fast forward to his arrival in CPT & I fetched him with a smart delegation 👇🏽👇🏽👇🏽 pic.twitter.com/hdSAuhzBok

Another student who got a surprise welcome by Phakeng at the bus terminal was Anelisa Shozi, also of Durban.

Shozi had been attending orientation week at Wits when she got an email that she had also been accepted at UCT.

"I got the shock of my life but in a very amazing way. I was not expecting to meet or even be fetched at the bus stop by the vice-chancellor herself. I felt overwhelmed," said Shozi.

Shozi, who is enrolled to study audiology, said her passion was to help people with speech and hearing problems.

"I'm studying towards being an ear specialist where I'll be dealing with speech and language, hearing and listening conditions in patients," she said. She said she was looking forward to spending the next four years of her life at UCT.

Shozi described Phakeng as "a bubbly person who imparts wisdom and career guidance to young people".

Phakeng said Sibiya had sent her a direct message, saying he missed his bus and because he was going to arrive after 7pm she decided to fetch him.

She said after she posted that Nhlakanipho's video on social media Anelisa's aunt asked her to surprise her and fetch her too.

"Truth is I'm very busy... I'm happy to always help my students wherever I can," said Phakeng.

Protesters gathered outside parliament and at the first session of the World Economic Forum on Africa in Cape Town on Wednesday as part of the ...
News
2 years ago

Outside Roscommon House, where slain 19-year-old UCT student Uyinene Mrwetyana lived in Cape Town, her friends were talking in low voices, their ...
News
2 years ago

University of Cape Town vice-chancellor Professor Mamokgethi Phakeng announced the establishment of the Uyinene Mrwetyana scholarship for women in ...
News
2 years ago
Next Article