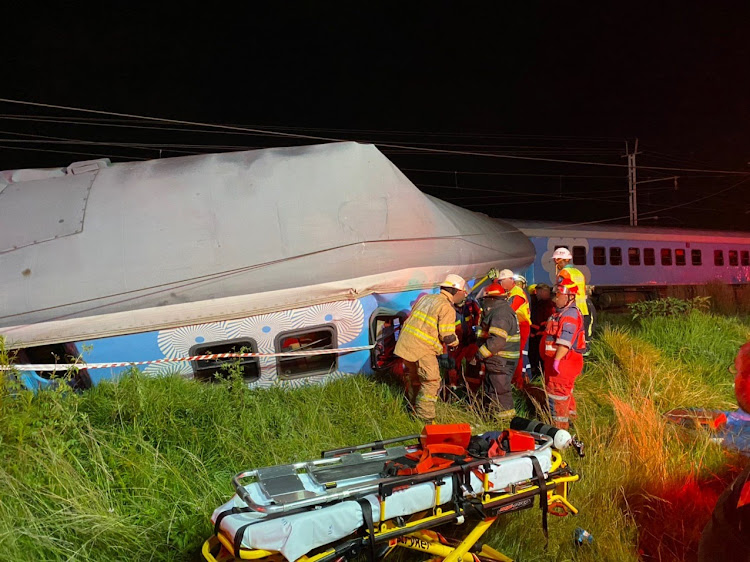 A Prasa Premier Classe passenger train collided with a stationary Transnet goods train between the Roodepoort and Horizon stations at 9.53pm on Wednesday.
Image: Netcare911

Transport minister Fikile Mbalula has called for a full investigation into the cause of a train collision in Roodepoort, on the West Rand, which claimed the life of a passenger.

A Prasa Premier Classe passenger train collided with a stationary Transnet goods train between the Roodepoort and Horizon stations on Wednesday evening.

Five people were injured and transported to hospital.

According to the department of transport, 31 people, including 14 staff members, were on board when the train crashed.

Mbalula said the department would identify the cause of the crash and “devise strategies to minimise similar occurrences in future”.

Alternative transport was arranged to transport passengers to their destinations.

Train services operating between Randfontein to Johannesburg were suspended on Thursday morning following a deadly crash that left a person dead and ...
News
2 years ago

Metrorail services will be affected along the Randfontein to Johannesburg lines, with commuters advised to make alternative transport arrangements.

The United National Transport Union, in its reaction to the crash, called on Mbalula to dissolve the board of the Railway Safety Regular (RSR).

“To date the RSR has taken no accountability or even attempt to approach the Gauteng North High Court to review its two court orders because of Prasa inability to adhere to rail safety previsions.

“The RSR has no teeth and cannot be compared to other watchdog institutions like [the SA Civil Aviation Authority]. If civil aviation grounds an airline, it remains grounded until it is declared safe to start operating again.

“The RSR on the other hand simply turns a blind eye,” the union’s general secretary, Steve Harris, said.

Mbalula was releasing the preliminary investigation report in Rosslyn on Wednesday by the railway safety regulator on the crash on Saturday.
News
2 years ago

At least 50 people were injured when a railway maintenance locomotive rolled into a passenger train at Mamelodi, Pretoria.
News
2 years ago