Stacks of documents piled up at Joburg high court, but judiciary says it is 'making progress' 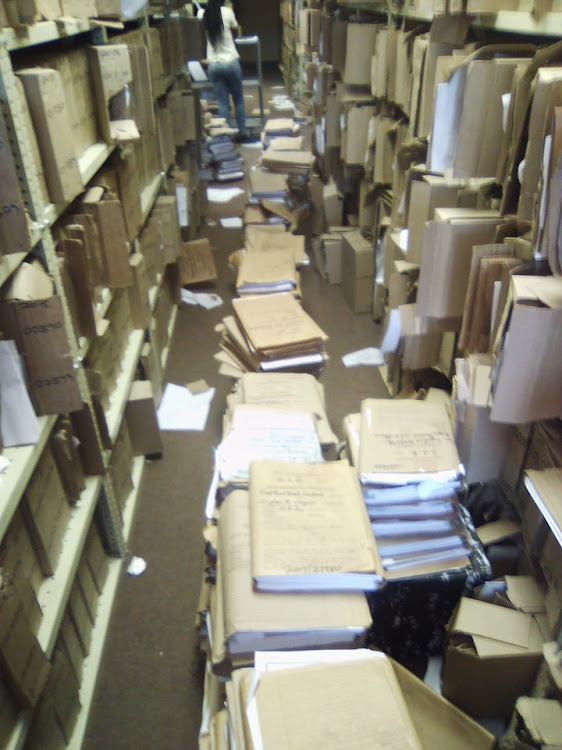 Court files lay scattered at the Johannesburg high court, according to a legal firm who posted pictures on Facebook.
Image: Supplied

Several years after the office of the chief justice announced it would digitise the filing of court records, files continue to pile up in rooms at courthouses amid a shortage of space.

Legal firm Phoenyx Legal Services took to social media recently to share their frustrations about the filing situation at the high court in Johannesburg.

"Something needs to be done here," the company wrote.

The pictures were taken on the 10th floor of the high court building.

They show files packed on shelves and on counter tops, but also spilling over and being piled on the floor of the room.

"Clients do not understand the situation we have to deal with when looking for archived files," the company wrote.

Judiciary spokesperson Nathi Mncube acknowledged there was a problem.

“We have had challenges with the filing space in most of our courts, with particular reference to Gauteng local division. You might be aware that all court records at the superior courts after finalisation are not destroyed, but are archived. So documents going back to the 1980s still exist,” Mncube said.

“As the work load increases, the records increase and the filing space doesn’t increase. In an attempt to deal with this challenge and create more filing space we resorted to an off-site storage system, but as an immediate and interim measure a space was identified on the 10th floor of the [court]. This space is not fitted with shelves.

"It was identified and the files were moved there in December 2019 in order to relieve pressure in the area where active files are kept."

Mncube expressed concern about how a person member of the public was allowed entry into the records room.

“It is regrettable that a member of the public was allowed access in that area. That should not have happened. I must add that the request to retrieve records is done by means of e-mail. Parties are supposed to send an e-mail to a designated email address requesting a file. Officials will retrieve the file and notify the party when the file is ready for collection,” Mncube said.

According to the company, in the comments to their social media post, the erratic filing system meant they often had to make multiple copies of documents for the archived cases.

"We are chopping off forests by the amount of copies our clients have to make to recreate duplicate files, and then after the matter has been heard the duplicate file also disappears,” the firm said.

Mncube said the filing issues would be resolved by the end of March.

“We are making progress with digitisation. Caselines was launched as a pilot project in Gauteng last year. It has progressed well and [the] judge president is considering a full roll out in Gauteng. Caselines allows for electronic filing. It will not have an immediate impact but will greatly assist in dealing with the filing space challenges going forward,” he said.

Clinic is a 'ticking time bomb'

"Clearly there was no proper planning done when they opened this place" BUILT as part of the 2010 legacy, the recently opened R72-million Nelspruit ...
News
9 years ago

If you need medicine from South Rand Hospital‚ expect to wait up to 80 minutes. That’s half an hour faster than the average accident and emergency ...
News
6 years ago