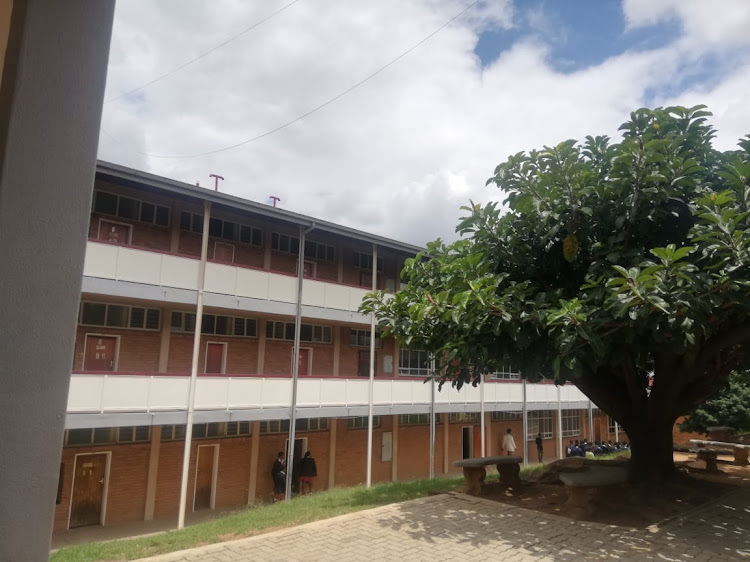 It was harrowing ... unique screams alerted teachers when a pupil plunged to his death at Ferndale High School.
Image: Nonkululeko Njilo

It was the harrowing screams that rang out at 9.30am at Ferndale High School on Tuesday that alerted teachers and the school principal that tragedy had struck.

“They knew those screams were not ordinary screams of learners playing. This was unique. The teachers heard screams from the learners, but the principal was also around,” said Gauteng education MEC Panyaza Lesufi.

On arriving at the scene, what the staff members found was horrifying.

Kelebogile Reuben Malopyane, a grade 10 pupil, had seemingly jumped off the school's second-floor balcony. He had reportedly been sick and had been absent from school the previous day.

“He was rushed to hospital where, unfortunately, he left us,” said Lesufi.

The mood was sombre at the school in Randburg on Wednesday, as pupils grappled with the tragic death - which occurred in full view of pupils. The incident occurred in the morning as pupils moved in rows to go to their next lesson - the second period of the day.

Malopyane is one of 12 Gauteng pupils who have lost their lives since the start of the 2020 academic year.

“We are counting body bags instead of counting mathematics,” said Lesufi, who visited the school on Wednesday, where he received a report on what had transpired.

“The learner looked sick, actually was sick [on Monday],” he told the media.

Gauteng education MEC Panyaza Lesufi has reiterated a call for spiritual leaders to intervene as more pupils have been reported dead.
News
2 years ago

The department earlier said he may have suffered a seizure related to epilepsy.

“On the basis of changing periods, they leave the classrooms in rows. He was on the second row ... When he left, the teacher was concentrating on the third row,” said Lesufi.

The school principal could not contain her emotions as she took members of the media and officials on a walkabout to where Malopyane spent his last moments.

Pink roses were left where the boy had died.

Lesufi said staff at the school could not have anticipated the incident.

“You’ll never anticipate that someone will jump. There is CCTV, that I refused even to watch, that the school has that serves as evidence of what happened. From the time that the learner left the class, it's recorded.”

The department said it had sent its psycho-social unit to the school to provide counselling to affected pupils and teachers.

Plans for a memorial service were under way while the family, through the department, asked for privacy during the difficult time.

A male pupil died after he fell from the second floor at Ferndale High School in Randburg on Tuesday morning.
News
2 years ago

“We are getting there,” said a grade 10 teacher at Ferndale High School when Gauteng education MEC Panyaza Lesufi asked on Wednesday how pupils were ...
News
2 years ago
Next Article