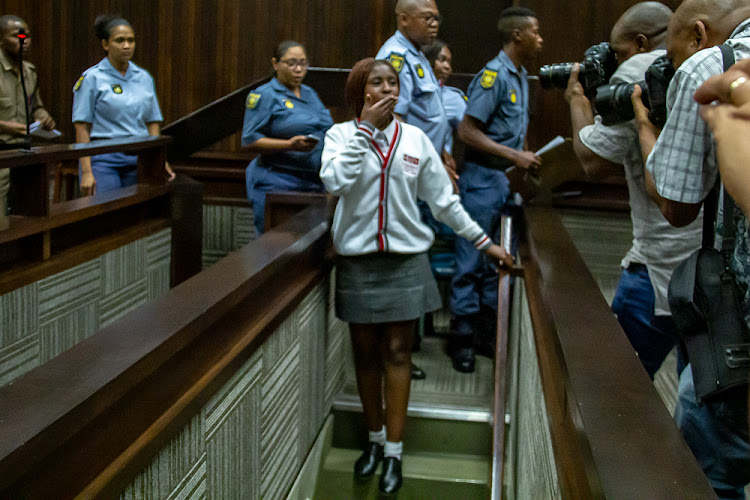 Karabo Tau blows a kiss to her family in the Bellville magistrate's court on Tuesday.
Image: Anthony Molyneaux

The Claremont High matric pupil was arrested for allegedly kidnapping a two-month-old baby from Khayelitsha on January 16. After being in custody for more than two weeks, she was allowed to go home.

"I haven't eaten anything but a peach for more than two weeks while Karabo has been in jail. The investigating officers need to do their job properly and not just bring a case against someone from a Facebook picture.

Witnesses at the bail hearing of an 18-year-old schoolgirl who allegedly stole a baby from its mother have been accused of fabricating evidence.
News
2 years ago

Before the ruling, Karabo's lawyer Sulaiman Chothia brought forward arguments after the prosecution rested their final arguments on Tuesday.

"The state did not produce sufficient and satisfactory evidence to refuse bail. She denies the allegations - she said she was at school on the day and time when the incident happened. The two witnesses who said they saw Karabo at school were reliable witnesses - one is a teacher, the other a manager. Why would they come to court to lie?" argued Chothia.

"The prosecution knew from day one that we had footage proving Karabo was at school on the day in question, but they still went ahead and then said the witnesses lied and the footage was wrong.

"The applicant has shown she has an alibi. You can't be in two places at the same time - not in this universe.

"Freedom is of a paramount importance and the police have the wrong person in custody. Karabo might have a very bright future ahead of her and it could be destroyed by a case of mistaken identity," said Chothia.

"Four detectives were interrogating me throughout the day I was arrested. The detectives said if I admit I took the baby they would make sure I would ...
News
2 years ago

"There have been enough delays due to court issues. A further delay will defeat the bail process," he said. "This case, where a baby has gone missing, is a tragedy - and this court is not here to decide if the accused is innocent or guilty. The state needs to prove it is not in the interest of justice to grant bail to the accused. But this court, however, is not satisfied with the state's evidence led.

Karabo's mother broke down in the gallery when bail was granted and supporters danced and celebrated outside.

A group of people opposed to Tau's bail were watched closely by police as they sang in defiance of the ruling.

The case has been remanded to April 7 for further investigation.

The baby abducted from Chris Hani Baragwanath Academic Hospital still does not have a birth certificate, seven months after she was born.
News
2 years ago