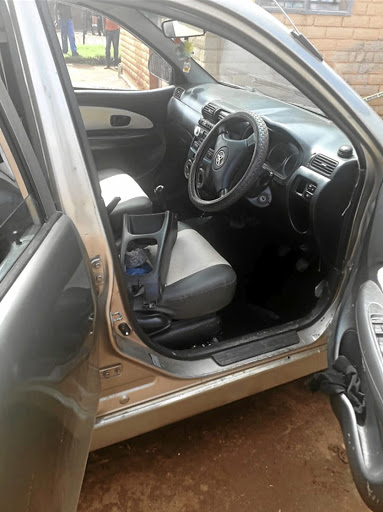 The car reported stolen had its centre console put on the driver's seat when the security guards arrived.

Recovery agents of a car-tracking company claim that they shot a man in his family yard because they thought he was stripping a "hijacked" vehicle.

Cartrack, a vehicle-tracking company, yesterday said its agents shot 20-year-old Mpumelelo Mokase after he failed "to obey orders" to lie down when they arrived at the house in Etwatwa, Benoni, on Sunday morning.

However, Cartrack said they have now suspended the agent who fired the shot while awaiting police investigations.

Mokase was shot just below the chin and the bullet went through his neck. He is currently fighting for his life in the intensive care unit of the Far East Rand Hospital.

Cartrack South Africa CEO Harry Louw said the recovery team thought the vehicle which had been reported stolen a day before, was being stripped by Mokase and another unidentified man.

This was despite the car being parked at the home where it was reported missing from.

A 20-year-old man is fighting for his life in hospital after he was shot by a vehicle recovery crew who found him washing a car reported missing.
News
1 year ago

The car, a Toyota Avanza, which was being driven by Mokase's uncle, was reported stolen by his panicked wife who said her husband had failed to return home.

The husband had apparently gone to a 21st birthday party but failed to inform his wife or take her calls.

His wife, Thembi (not her real name) made several calls to him but his cellphone was off all the time. She then checked the vehicle-tracking app linked to his car.

Thembi said the app showed the vehicle was at an unidentified location.

When the Cartrack recovery team arrived on Sunday at the home address they found Mpumelelo Mokase, 20, washing his uncle's car.

The wife and her husband were apparently quarrelling inside the house and she did not alert Cartrack that the vehicle was back home.

The recovery agents said Mokase, "appeared to be stripping the vehicle".

Mokase was ordered to lie down together with another man but he refused to cooperate, according to Louw.

The state in the case against the man accused of causing Top Billing presenter Simba Mhere’s death‚ wants to call new witnesses — one from a car ...
News
5 years ago

"He was then shot during a scuffle with the recovery guards.

"Some of the doors were open, seats laid down, a section of the centre console was on the driver's seat, and another car part was outside of the vehicle. It is common practice for car thieves to strip vehicles to locate the tracking device.

"It was only established later that the car was not stolen and the person who had reported the vehicle missing admitted to making a mistake and apologised," Louw said.

"In the interests of public safety, the recovery agent has been suspended while this case is being investigated, and we are fully co-operating with the SAPS."

Louw did not answer questions as to why the recovery team had failed to pick up that the car was parked at the owner's house.

Police spokesperson Capt Kay Makhubele said police did not arrest the suspect on the spot because he was on duty, responding to a hijacking.

"What is going to happen is that statements will be taken and the matter will be taken to the prosecutors for a decision. The firearm was taken from the suspect," said Makhubele.

A multi-million rand car wash project owned by the City of Tshwane, which was meant to create jobs for the youth of Mamelodi and invigorate the ...
News
2 years ago

The family of Bosasa boss Gavin Watson has welcomed the decision by transport minister Fikile Mbalula to launch a full investigation into his fatal ...
News
2 years ago