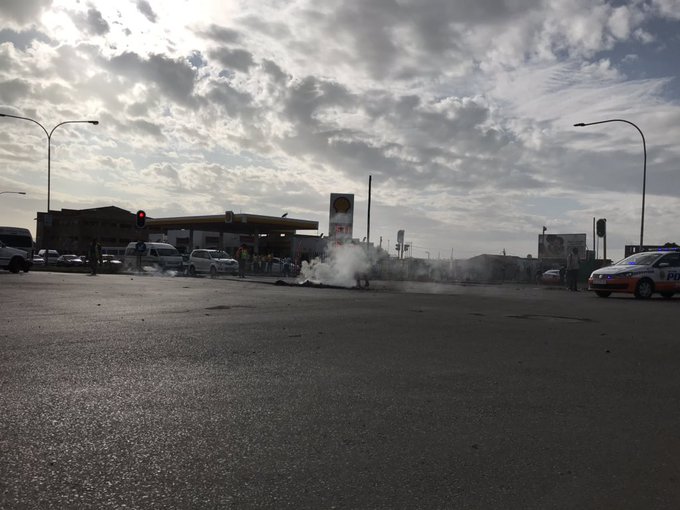 The councillor of ward 37 in Soweto has accused a faction of her community of having a vendetta against her, following a volatile service delivery protest that broke out yesterday.

Several major roads in White City, Mofolo, Fred Clark, and Nancefield were barricaded with rubble and burning tyres as residents demanded that Zodwa Nxumalo step down.They accused Nxumalo of failing to roll out services to their communities.

Nxumalo yesterday said the allegations made against her were unfounded and that residents failed to follow the correct processes in bringing their grievances to her attention.

“There is a vendetta against me by these people. They were supposed to follow the right channels in letting me know what they were complaining about, not to close off all areas. These allegations of lack of service delivery are not true,” Nxumalo said. “I know that there is a guy who is supposed to be evicted and doesn’t want to be, he connived with some members of the community to protest against me and demand that I step down because he is not happy with me,” she said.

Sipho Jele, a community member from Mofolo, said they took to the streets after venting their frustrations through the correct channels, but got no response.

“There’s a lot of projects that have stalled in this area. Youth unemployment is high, crime is rife, but there are opportunities to have these things resolved.

“Zodwa has been a councillor here for 10 years, but there is nothing she has done. Why do you think we’re blocking roads? We should be working and keeping ourselves busy, but she has made opportunities inaccessible to us,” Jele said.

Another resident, Phumla Zungu, said Nxumalo was inaccessible and the residents were frustrated as they had nobody to complain to for service delivery related matters.

“Last week, the police shot at us when we protested. We took out memorandum to Luthuli House, hoping they would intervene. They said they would respond by yesterday (Monday), but they didn’t. So we’re upset because nobody is listening to us,” she said.

Various main roads, including Klipspruit Valley, Elias Motsoaledi and Vundla road were closed off, while traffic was severely impacted with the Rea Vaya service also being suspended.

Provincial police spokesperson Cpt Kay Makhubele said no arrests were made during the protest.

“Police and Metro police were deployed in the vicinity. We did not receive any reports of damage to property and no one was arrested,” he said.

Residents of ward 37 in Soweto this morning took to the streets and barricaded a number of roads with rocks and burning tyres.
News
2 years ago
Next Article