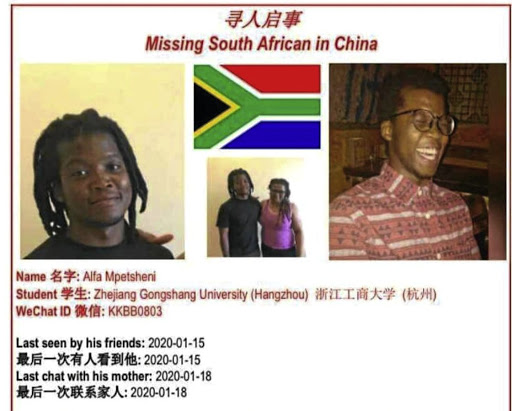 Alpha Mpetsheni's family are worried by his disappearance.

A South African student who is studying in China has been missing for three weeks, but his concerned family is still hopeful that he is alive.

Alpha Mpetsheni, who was doing his final year BCom in international trade at Zhejiang Gongshang University in Hangzhou, disappeared three weeks ago. His disappearance has been confirmed by his father Thulani Mpetsheni.

Alpha, 25, from Olifantsfontein outside Tembisa, last spoke to his mother on January 18, while his friends in China last saw him on January 15. His father said they were hopeful that he was still alive despite the coronavirus outbreak in China, which has killed over 800 people.

"We do think that he might have caught the virus but we are comforted by the fact that we know that he disappeared before the outbreak and that he was far from where coronavirus was killing people. We have hope that he might be in jail or hospital.

"For the past two weeks it was frustrating because the movement of people was limited in China. So, it is only now that people were allowed to go to other states."

Mpetsheni said they became aware of his disappearance after his friends contacted them. "We thought he might have gone somewhere and decided not to tell his friends.

"We are still hopeful, but the fact that he has disappeared for three weeks is beginning to worry us. It has been difficult for us as a family."

Tristan-Lee Niemand and six other South Africans have completed their detention period.
News
3 years ago

The family has now pinned its hopes on his friends and the South African consulate in Shanghai.

Mpetsheni said they last saw Alpha when he visited the family in June and July and then returned to China in August for his final year.

He said Alpha moved to China after completing his matric in SA to join his parents, who were working in China. The parents have since returned to South Africa.

Sowetan has tried to get a comment from the department of international relations & cooperation but the attempts were unsuccessful.

The department spokesperson Clayson Monyela's phone was off.