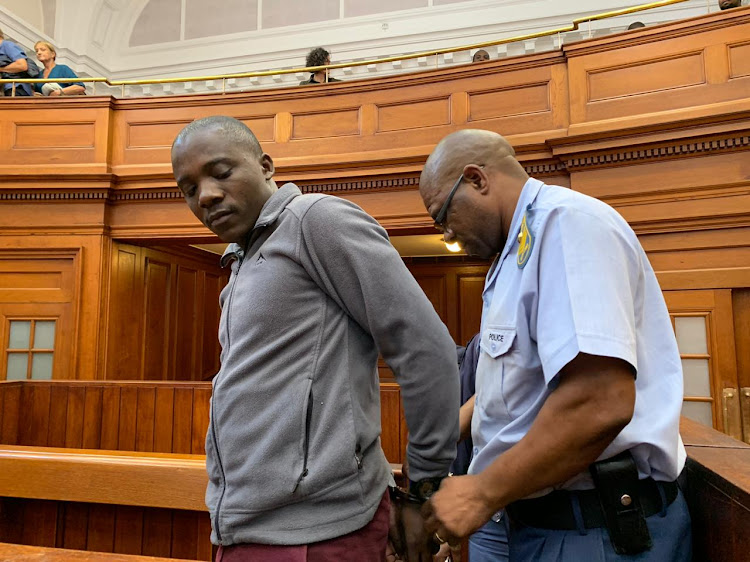 Blessing Bveni, who faces two counts of murder and one of attempted murder, in the high court in Cape Town.
Image: Anthony Molyneaux

Allyn McPherson's life was defined over 47 years by the presence of her husband, Ian.

When he brought her a cup of coffee in bed and told her “I love you” at 7am on March 13 last year, this chapter of her life was about to come to an end.

“My husband was my life,” said the pensioner, her shaking hand bringing a soaked tissue up to her eyes to dry more tears.

She took great care not to look to her left, where Blessing Bveni, the man accused of murdering Ian in one of a series of attacks on cyclists and runners in Table Mountain National Park, sat in the dock in the high court in Cape Town on Monday.

Bveni looked at her with a strained expression as the court interpreter translated her words to Shona.

The McPhersons moved to SA from Zimbabwe in 2006.

McPherson said last week that her husband worked at a mine in Zimbabwe until his retirement. However, the bank was unable to pay his pension after the collapse of the banking sector in the country in the early 2000s.

This has destroyed my husband's siblings. As for me, all I can say is that my husband was my life

The economic crisis in Zimbabwe led to Bveni, a Zimbabwean citizen, coming to SA too, and allegedly seeking asylum on a false passport, a crime for which he is also being charged under the Immigration Act.

Bveni is allegedly responsible for attacks which took place at the southern end of Table Mountain National Park, near Silvermine Nature Reserve, at the end of 2017 and start of 2018, until he was arrested after Ian's murder.

At the time the attacks received widespread media coverage and created concern around the safety of hikers at the World Heritage Site.

Bveni faces two counts of murder, one of attempted murder, four robbery charges, assault with intent to cause grievous bodily harm and charges under the Immigration Act.

McPherson said after Ian gave her coffee he went off on a two-hour training ride on his new mountain bike.

He was only days away from competing in the Heritage Challenge, a sponsored mountain bike event in Zimbabwe, and was testing a modification he had made to his bike wheels in the sand dunes near Fish Hoek.

She would follow his movements on her iPad through an app connected to his cellphone.

“I told him I was going to visit a friend for coffee and I would be back at 11am. When I got back I could see he wasn't home because his bike wasn't there,” she said.

She went to the kitchen counter, where he would usually leave a note to let her know where he was, but there was no note.

Then her friend called her to say a cyclist had been attacked and killed.

Body found on Table Mountain identified as that of missing woman

The body of a woman found by a tour guide on Table Mountain has been identified as that of missing Cape Town lecturer Sakina Grimwood.
News
3 years ago

'They cut him to pieces, and for what? A backpack?'

The wife of slain Russian hiker Ivan Ivanov, who was killed on Saturday on a Chapman’s Peak hiking trail, said he was a “good dad and the most ...
News
3 years ago

A Ukranian man was robbed and fatally stabbed while walking on the scenic Chapman's Peak Drive in the Table Mountain National Park in Cape Town at ...
News
3 years ago

McPherson was always concerned for her husband and even made him a card with personal information, such as a medical aid number and emergency contact numbers.

“He was accident-prone,” she said.

When she looked at her iPad she saw that his route had gone “all over” Masipumelele, a township near Fish Hoek.

She called Cape Medical Rescue and asked whether they had treated her husband.

Paramedics then came to her house and she showed them the map on her iPad. This was downloaded by one of the paramedics and taken to police investigators, who had already started scouring the sand dunes and Masipumelele for Ian's killer.

She moved to the UK after the attack and now lives in a cottage belonging to her son.

“This has destroyed my husband's siblings. As for me, all I can say is that my husband was my life,” she said.

Her husband's sisters and family members filled the gallery, and one of them consoled her in the witness box.

Earlier, state prosecutor Christopher Burke told the court that witnesses received death threats over the phone, urging them not testify in court.

The state is considering witness protection.

Bevin’s defence attorney, Henk Carstens, said: “The accused does not have the facilities to organise something like that”.