Eight distinctions and a secure future, first week at Wits was a breeze for Triphin Mudzvengi 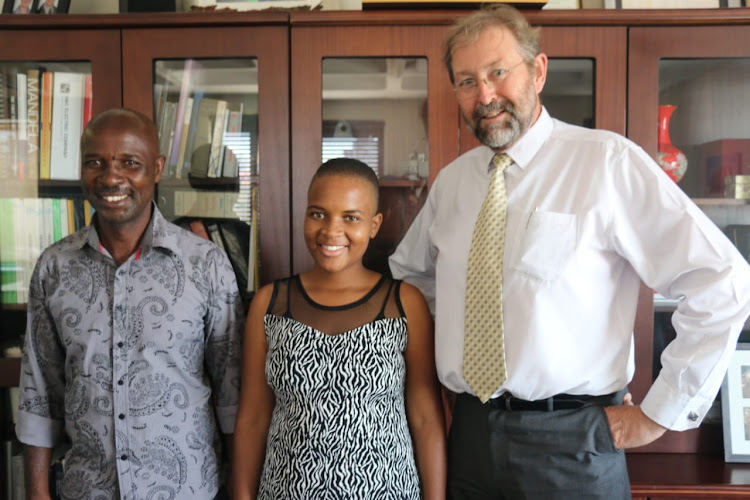 Triphin Mudzvengi with her proud father Polate Mudzvengi and Ian Jandrell, head of the faculty of engineering and the built environment at Wits University.
Image: Supplied

Triphin Mudzvengi was stuck at home in the North West three weeks ago with eight matric distinctions but little hope of studying further.

But this week she was navigating her way around Wits University - and getting lost trying  to find her lecture hall - with a bright future ahead.

Mudzvengi started attending civil engineering classes on Monday after good Samaritans read about the plight of the 18-year-old whose parents could not afford to enrol her at university to study engineering.

She could not apply for financial assistance through some of the traditional routes taken by South African students because she is Zimbabwean. She arrived in SA with her family a decade ago. As an asylum seeker, she could also not approach her embassy for help.

Mudzvengi said on Friday that it felt overwhelming to be rubbing shoulders with students at Wits: “It feels really good, still overwhelming.”

Like many first-year students, Mudzvengi was still trying to find her way around the campus and had, on one occasion, got lost.

“On my first day I got lost trying to find the lecture venue,” she said.

But in the company of new friends, she won't have to get lost alone.

Her struggle to get into university went viral after her story was published by GroundUp. Pledges for financial help started rolling in.

Cash-strapped Triphin will enrol at Wits, thanks to a little help from some friends

South Africans have rolled up their sleeves and hatched a plan to send a cash-strapped matriculant with seven distinctions to university - just two ...
News
2 years ago

Jansen says Mudzvengi has now been fully funded for the 2020 academic year and the focus has shifted towards helping her next year.

At least three streams of funding are in place, including a backabuddy campaign which had raised more than R12,000, a student account and a personal account.

Sponsors guaranteed funding based on academic performance and Jansen said he was committed to supporting the student throughout her four-year degree.

Mudzvengi's tuition and accommodation needs have been taken care of and she has a laptop and monthly stipend courtesy of Zororo Phumulani, a Zimbabwean funeral insurance company based in SA.

“The company believes that the best insurance we can give a child is education, hence we always  answer the call whenever school-going kids are involved,” said CEO Edwin Anderson.

Maths was the first class Mudzvengi attended, after which she said she was confident that she would sail through her first year of study.

“I was a bit scared but after attending my first mathematics class, I realised what was taught was a continuation of what we had already studied in grade 12. We were introduced to new concepts which I am going to process,” she said.