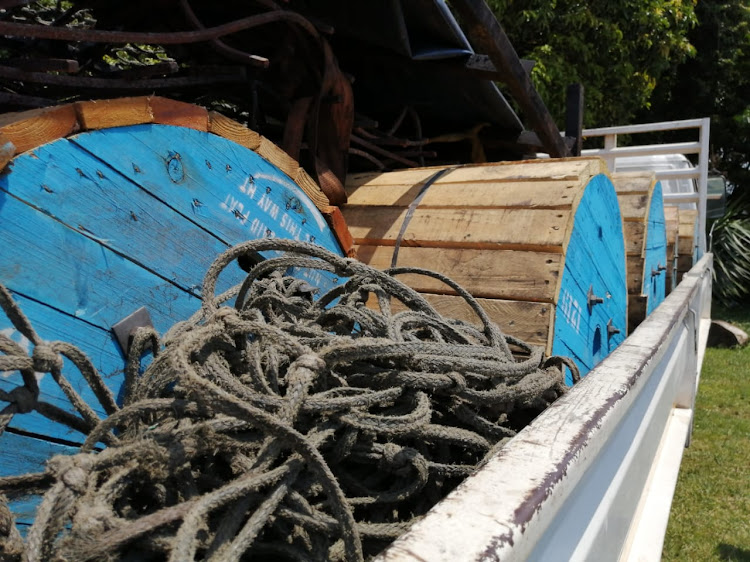 A truck carrying barrels of stolen eThekwini electrical street cables, worth millions of rand, was recovered after police pulled the driver over on the R102 near Umkomaas, south of Durban, on Wednesday. The driver, along with his employer, were arrested.
Image: Orrin Singh

A syndicate of eThekwini employees and subcontractors are believed to behind an act of sabotage which has seen the municipality struggle to provide water to residents.

Reports of ongoing water shortages in eThekwini have been rife in recent weeks, with some areas having been cut off without water supply for days at a time.

But the arrest of a former eThekwini subcontractor and his employee may prove to be the missing link into uncovering the cause of the water woes.

On Wednesday, police in Umkomaas on the south coast, acting on information, pulled over a truck carrying electrical street cables, worth millions of rand and belonging to eThekwini, on the R102, south of Durban.

Chairperson of eThekwini's Human Settlements and Infrastructure Committee, councillor Thanduxolo Sabelo, said part of the reason there are problems with water supply in the city is because of the failure to supply electricity to pump stations.

He said while electrical cable theft was the major cause of disruptions to water supply, load-shedding worsened the problem.

#WaterSabotage two people have been arrested by members of @SAPoliceService for stealing cables worth millions of rands from @eThekwiniM resulting in water shortages for the city of Durban. Cllr Thanduxolo Sabelo explains @TimesLIVE pic.twitter.com/o1eYUA6tQx

Sabelo, who replaced the controversial Mondli Mthembu - implicated in the R389m Durban Solid Waste tender scandal - revealed that the recently elected executive committee of eThekwini “came into the problem” of cable theft.

“This has been affecting the city for a number of years now and it has been very difficult to curb because cable theft does not happen in broad daylight. They do it at night and they try to target remote areas.”

According to ​​​eThekwini's head of electricity, Maxwell Mthembu, the subcontractor had previously done electrical work for the municipality up until his contract expired and was not renewed in 2017.

“When the truck was pulled over, the owner of the truck suddenly arrived in his own vehicle to explain to police that this was his truck carrying the cables,” Mthembu said.

This incident has led him to believe that there is a cabal working within eThekwini.

“I can tell you now with confidence, such an operation, you cannot do alone as an outsider - you need someone from within to do such.”

The two men appeared in the Umkomaas Magistrate's Court on Thursday on charges of possession of property suspected to be stolen.

They are expected back in court next week.

Hawks spokesperson Simphiwe Mholongo confirmed with SowetanLIVE sister publication TimesLIVE that they would be investigating the case further.

It was 12 months of tension and drama

It was 12 months of tension and drama

THE hosting of the climate change conference in Durban was South Africa's humble contribution to the world, Deputy President Kgalema Motlanthe said. ...
News
10 years ago
Next Article