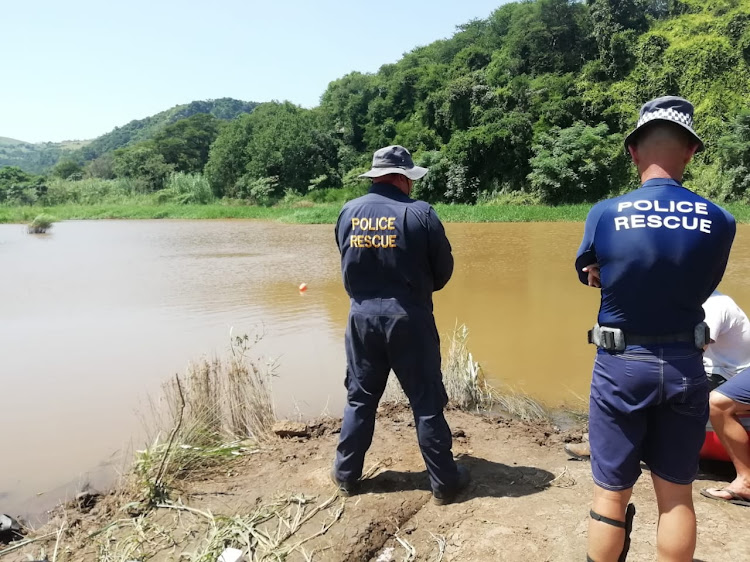 Police SAR members scour the Mvoti river in Glendale, north of Durban, where 8-year-old Nkosiyethu Gumede is believed to have drowned on Sunday while swimming with his father. His body has not yet been recovered
Image: SAPS

At least nine people have drowned and three remain missing in KwaZulu-Natal in the past five days.

In what has been described as a tragic week, police search and rescue (SAR) teams across  KZN have been working around the clock to locate the missing victims.

• Members of Pietermaritzburg SAR and K9 SAR recovered the body of a 10-year-old boy from the Mkansini river in Weenen, inland KZN.

• Police divers from Durban SAR, Empangeni SAR, Durban Metro Police SAR, Umhlali K9 SAR and IPSS Medical Rescue were called out to Glendale for a drowning. A father and his eight-year-old son, Nkosiyethu Gumede, were swimming in the Mvoti river when Nkosiyethu got into difficulty in deep water and drowned. The search was suspended.

• Police divers from Durban Metro Police SAR, eThekwini Lifeguards and Life Response EMS were called out to conduct a search for 15-year-old Mqobi Lusanda Kweyama, who was standing on the rocks at the main beach in Amanzimtoti when he slipped, fell into the water and drowned. The search was suspended.

• Members of Empangeni SAR and K9 SAR recovered the body of a 37-year-old man who had drowned in a dam in eShowe, northern KZN. It is understood that the victim had gone to search for a girl, 8, who was reported missing on Sunday. The man is alleged to have gone into the dam to search for the missing girl when he got into difficulty and drowned.

#sapsKZN Empangeni Search & Rescue with K9 Search & Rescue members resumed their search for the victim that drowned on yesterday at Mngampondo area, Eshowe. The body of the 37yr-old male, was recovered as he was floating on the surface. Inquest docket opened. TM pic.twitter.com/C1qhozde4k

• Members of Pietermaritzburg SAR recovered the body of a 10-year-old boy who was caught in a flash flood and washed down the Mpitshana river in Umzinyathi, inland KZN. The boy is alleged to have been crossing a small stream outside his home when it began to suddenly flood due to heavy downpours. A police dog picked up his scent 1.5km down river where his body was recovered.

• Police divers from Durban SAR were called out to the Tugela river in the Newark area, north of Durban, where a 28-year-old man, known as Mfaniseni, is reported to have drowned. It is believed Mfaniseni had been fishing at the Umgeni water works dam when he slipped on the dam overflow wall, falling into the water and drowning. Due to the prevalence of crocodiles in the area the search was suspended. 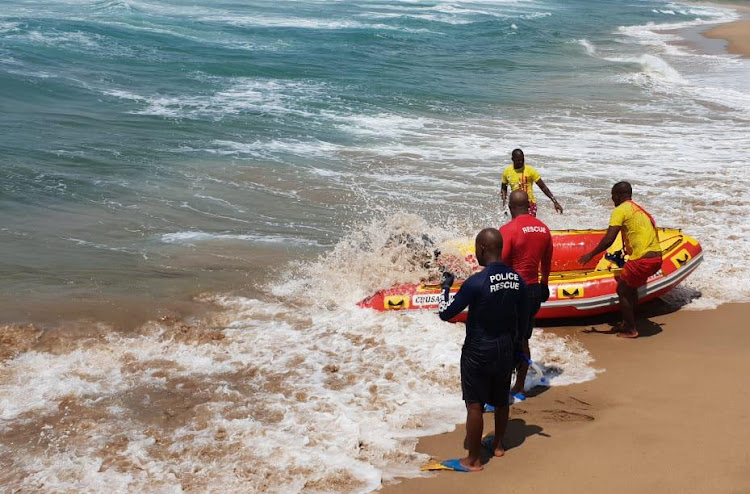 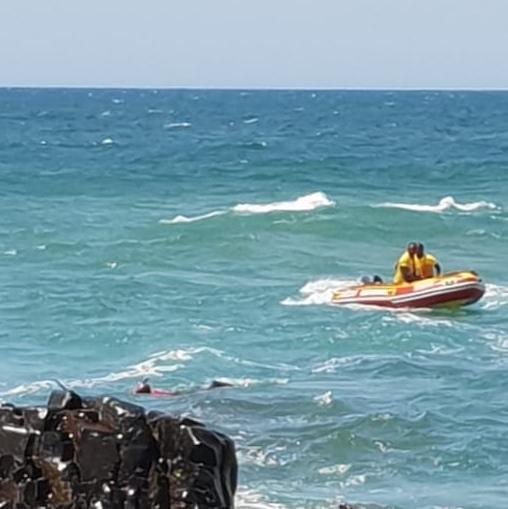 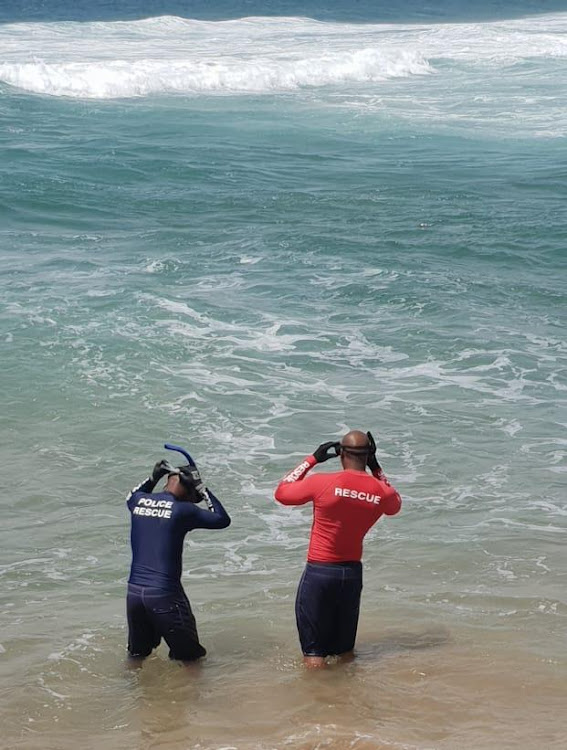 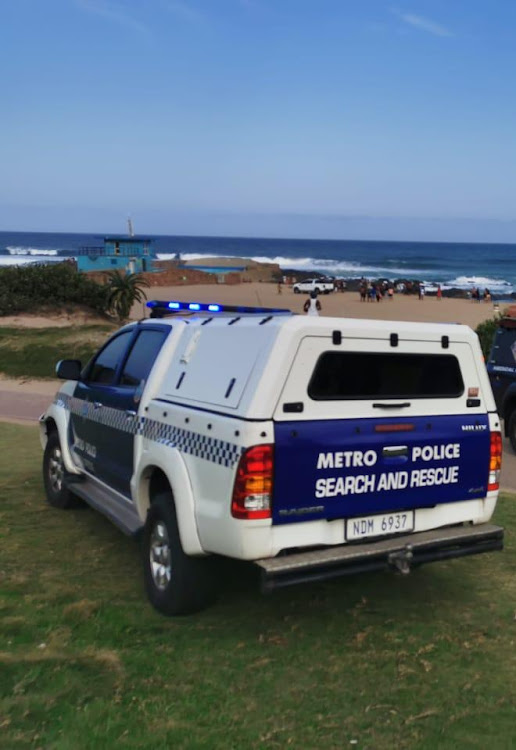 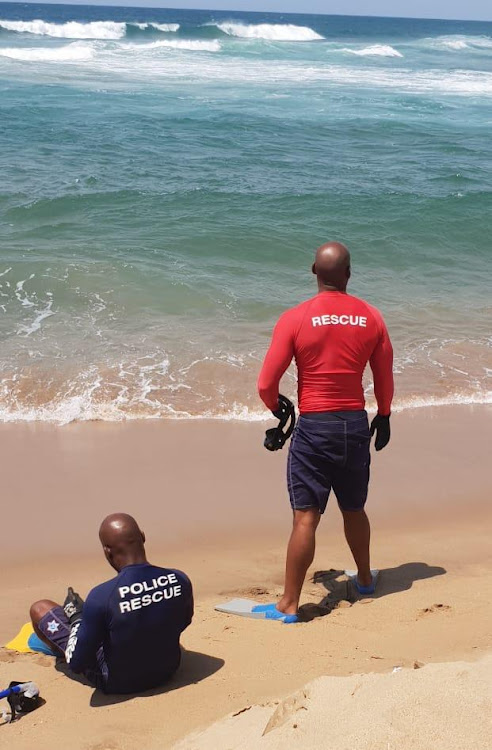 • Members of Empangeni SAR recover the body of Mfaniseni in the crocodile-infested Tugela river.

• Police divers from Durban SAR, Durban K9 SAR, PMB SAR and Metro Police SAR  responded to a triple drowning that occurred in the Tafelkop area of KwaNdengezi, west of Durban. It is alleged that a group of children were playing in a river when a 10-year-old boy, Khanyisa Ndlovu, got into difficulty in deep water. Two older children, a 14-year-old boy, Nkululeko Joyisa, and Nkosinathi Cele, 15, attempted to help Khanyisa but also got into difficulty and drowned. The bodies of all three victims were recovered.

• Later that evening police divers from Durban SAR, Durban Metro Police SAR and National Sea Rescue Institute station 5 responded to a drowning at New Beach on the Golden Mile in Durban. It is alleged that two men and a woman decided to go for a swim after dark when they got into difficulties. The woman managed to make it back to shore with the help of a friend, however the two men were not as fortunate. The body of one of the men was recovered while the search for the other was suspended. 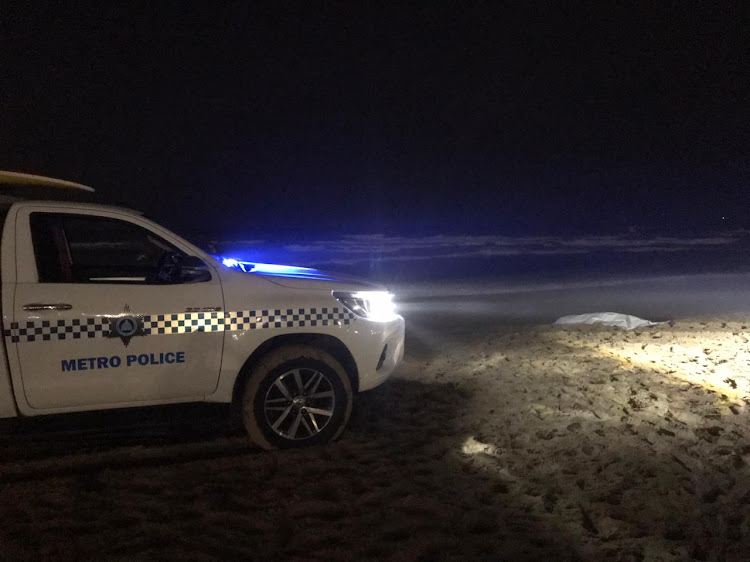 • Members from Port Shepstone SAR recovered the body of a 12-year-old boy who got into difficulty while swimming in a dam.

Three Limpopo toddlers found drowned in pool after wandering off

Limpopo police have opened inquest cases after three toddlers drowned in a swimming pool in a village outside Makhado on Friday.
News
2 years ago

'He had so many plans for the future,' says grieving father as schoolboy Enoch Mpianzi is laid to rest

At first stone-faced as officials greeted them and relatives tried to comfort them, it was only as Enoch’s maroon coffin was brought into the hall ...
News
2 years ago
Next Article