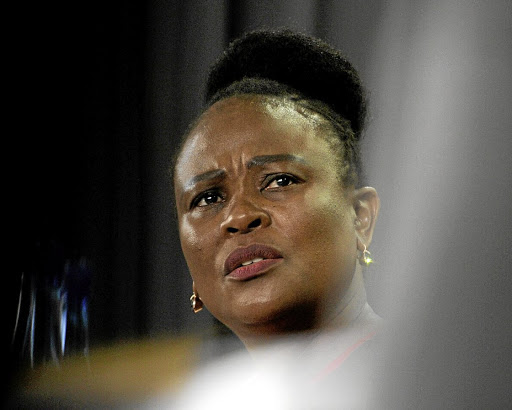 Public protector Busisiwe Mkhwebane's lawyer argued that she had the jurisdiction to probe the funding of the President Cyril Ramaphosa's CR17 presidential campaign as it involved state affairs.

Adv Muzi Sikhakhane argued yesterday in the North Gauteng High Court in Pretoria in an attempt to shoot down arguments of Ramaphosa's lawyers who had charged that the public protector went beyond her jurisdiction in probing funding of the CR17 campaign.

Sikhakhane argued that the state was more than just the executive, legislature and the judiciary.

"If you look at the state in a narrow way as lawyers do, you'd say it's the judiciary, executive and legislature... but these are parts of the four components of the state according to political science," Sikhakhane argued.

He said the the four parts of the state according to political science comprised the population, territory, government and sovereignty. He argued that the state, when looked at in a broader way, is "a sum total of these four components".

He was responding to Adv Tembeka Ngcukaitobi who argued on behalf of Ramaphosa that Mkhwebane had no jurisdiction in investigating private matters which had nothing to do with the state or public administration.

Mkhwebane had the jurisdiction to probe CR17 donations - lawyer

Advocate Muzi Sikhakhane is arguing that public protector Busisiwe Mkhwebane had the jurisdiction to probe the funding of the CR17 campaign as it ...
News
2 years ago

Ngcukaitobi had also argued that conclusions reached by Mkhwebane that Ramaphosa personally benefited from the donations made to his campaign were in contradiction of the evidence she had been presented with.

Ngcukaitobi said Mkhwebane was given a detailed breakdown of the facts regarding expenses of his CR17 campaign. However, despite having those facts, she still ignored them.

Adv Wim Trengrove, also arguing for Ramaphosa, accused Mkhwebane of misreading the law and acting with "reckless disregard" when she found that the president had misled parliament.

The court is hearing Ramaphosa's legal application for a judicial review of Mkhwebane's report on the R500,000 donation made by the late CEO of Bosasa, Gavin Watson, to Ramaphosa's 2017 campaign to become ANC president.