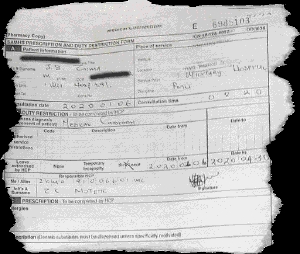 This is what former president Jacob Zuma's lawyers handed to the Pietermaritzburg High Court yesterday to prove that he was too ill to appear for his corruption pre-trial.

The note, which attracted curious questions from judge Dhaya Pillay, appears to have been issued by Dr Zakes Kagiso Motene, a long-serving presidential medical unit member at the 1 Military Hospital in Pretoria.

Sowetan was able to confirm that Motene works at the hospital, but the number that appeared on Zuma's sick note was not his practice number.

Pillay was not satisfied with the note.

The judge asked why Zuma's sick note had a stamp on it, but no date. A date on which Zuma's sick leave commenced also appears to be contentious as it was altered to January 6, but his legal team could not explain the alteration.

The diagnosis report is also vague, only stating that Zuma was diagnosed with a "medical condition".

Judge Pillay said that as much as the court could accept that Zuma was ill, the doctor's note did not sufficiently prove this.

Former president Jacob Zuma's legal team handed over a medical certificate to prove to the Pietermaritzburg High Court that the former president was ...
News
1 year ago

Judge Pillay also said there was no proof that the person who signed it off was a registered medical practitioner.

The term "layman's diagnosis" is used in the document. The judge and Zuma's instructing attorney, Daniel Mantsha, agreed that they did not know what it meant.

"Now in this regard, what goes out in the public domain, in the media and what is exchanged between counsel is not evidence. What this court requires is evidence.

"Some authentic reliable proof that Mr Zuma is indeed ill and when he will be available to stand trial," judge Pillay said.

She added that she had recently issued a warrant of arrest for someone who failed to appear in court and the court has a duty to ensure that everyone received the same treatment.

"The comparison that the community will make is how does the court treat Mr Zuma in relation to everyone else.

"So, it's standard practice in this court and in every court hearing a criminal trial, that if an accused is not in attendance, if an accused has failed to produce a medical certificate. without that evidence this court cannot do anything else, but issue a warrant of arrest."

Former President Jacob Zuma will face an arrest should he fail to appear in court when his corruption trial resumes in May.
News
1 year ago

The state has asked a Pietermaritzburg high court judge to issue a warrant of arrest for former president Jacob Zuma after his failing to appear at ...
News
1 year ago

The best way to nail public officials who have looted public funds and aided state capture with impunity was to use the tax system.
News
1 year ago
Next Article