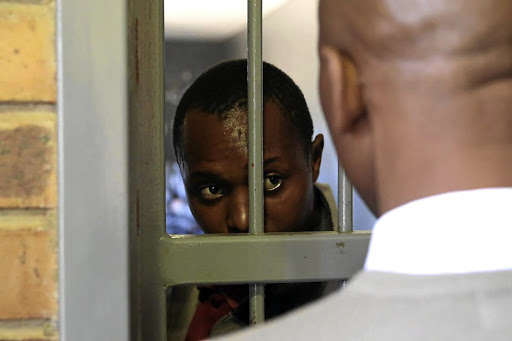 Julius Mndawe in the holding cells before appearing in the Masoyi magistrate's court outside Hazyview in Mpumalanga last year.
Image: Thapelo Morebudi

Const Joseph Mnisi won the trust of a suspected serial killer he was investigating for the murder of five people by befriending the man and buying him fried chicken.

Mnisi cracked the investigation into the gruesome murders of five women in Masoyi, Mpumalanga, in just eight days. For his efforts, Mnisi was honoured with a special police award during the National Police Day awards held in Port Elizabeth on Sunday.

Mnisi, who arrested the man dubbed "Masoyi monster" Julius Mndawe, said it hurt him to see women going missing, and he decided to take on the investigation that led to the discovery of five bodies of women killed and buried by Mndawe.

He said he was touched by the family of one of the women who were killed by Mndawe when they came to the police station to get an update on the deceased's whereabouts.

Mnisi, who is attached to the Masoyi police station's detective unit, took over the investigation of the case on June 24, and on July 1 he had already identified the suspect.

Castrating rapists is not solution to rape - a crime of power

I do not believe in violence.
Opinion
1 year ago

He said he arrested Mndawe on July 3 after befriending him so that he could be free to talk. "It was not an easy task because at first he denied all the allegations," Mnisi said.

"While interviewing him, I found out that I'm dealing with a very difficult person to get information from, but I had to find ways to make him talk.

"I befriended him and he developed trust in me, which included him asking me to buy him KFC. I would provide KFC for him and he would eat while I interview him."

Mnisi said he gained Mndawe's trust, who then agreed to go and point out the first body he had buried.

"After that we went to dig the second body. I asked him if there's more bodies and he agreed and promised to point them out later.

"Though he was a difficult person to talk to, at some point he would cry while we spoke. I had to sympathize with him and ask him to open up," said Mnisi.

Mndawe initially met Tlaka on Facebook before he lured her to his place.

A suspected serial rapist, who allegedly committed a series of crimes over a period of seven years, was arrested in Mokopane, Limpopo, on Monday
News
1 year ago

He confessed to have strangled or stabbed some of the victims. He would then bury them in his yard and plant vegetables on top of each makeshift grave.

"I'm very happy to get recognized during the awards. I believe that I was driven by passion when investigating the murders," he said.

"Julius indicated that he could feel that I am the only person he trust that could assist to free his spirit."

Mnisi said when he first met Mndawe, his observation was that he had anger issues but he cooled him down. "Julius was very calm, not a sign of violence could be detected from him. I could tell he felt defeated but feared going to prison.

"He had this anger buried in his mind against women. I could tell this in the way he described himself and the way he committed the crimes. The victims were somehow related or close friends. The suspect used his money to lure them."

Mnisi joined the SAPS in 2002 as a reservist at White River police station until 2007.

"I fell in love with policing while working as a reservist hence I stayed," he said.

"I have been a detective constable at Masoyi from 2010 to date. As a married father, I dedicate my hard work to making sure that children in the community don't go through what the five women went through."

Mndawe is yet to go on trial.

One prisoner at South Africa's super-maximum security prison Ebongweni has been held in solitary confinement for the last 10 years.
News
1 year ago

Video footage of Sandile Mantsoe casually strolling out of his flat while pulling a large bin shocked the nation when it was discovered that the ...
News
1 year ago