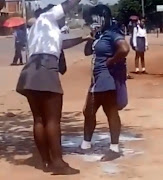 The Modiri Secondary School pupil who was filmed hitting another pupil will spend time behind bars.

The Modiri Secondary School pupil who was arrested for allegedly beating a fellow pupil is to spend a few more days behind bars, the Gauteng department of education said on Friday.

Spokesperson Steve Mabona said the Ga-Rankuwa-based pupil appeared in the local magistrate’s court on Friday where her case was postponed.

“She was remanded in custody until February 5 2020 for further investigation,” said Mabona.

The 19-year-old was arrested on Thursday after at least two videos depicting her assaulting a fellow pupil went viral on social media.

In the first video, the alleged bully is seen throwing punches as the victim tries to cover her face, not defending herself. The assault happened in full view of other pupils who watched until somebody intervened.

Done ! I met with the victim and assured her of our support. Learner suspended, SGB to be dissolved we are currently on our way to assist the family to open an assault case. Victim receiving counseling. Schooling will resume tomorrow morning @Abramjee @Enghumbhini @Steve_Mabona https://t.co/rIOJ1slFwZ

A second video showed the alleged bully spilling what appeared to be milk over her victim's head. Again the victim did not react.

It appeared that the videos were taken on the same day.

Gauteng education MEC Panyaza Lesufi went to the school on Thursday. His office announced afterwards that the perpetrator had been suspended with immediate effect and the victim would receive counselling.

“The parents of the victim are advised to monitor her and inform the district if there’s a need for intervention,” Mabona said.

The department encouraged the victim’s family to open a case of assault.

“The school governing body will be requested to provide reasons why they should not be disbanded, during the course of next week,” Mabona added.

Another video started circulating on Thursday evening in which the alleged bully looked at the camera and apologised to her victim, her parents and Lesufi.

“I have tainted the name of my school ... Please forgive me for what happened,” she said in Setswana.

“I would like to ask for forgiveness from Mr Panyaza Lesufi. I respect the decision he has taken including me being removed from school and having a case being opened against me.

The department of education has not responded to that video.