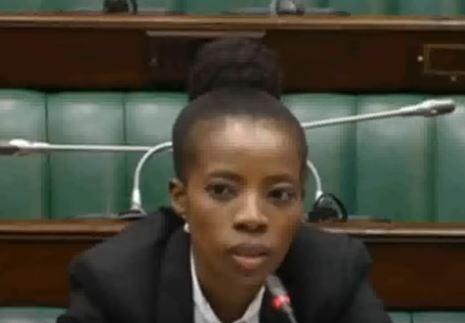 A screengrab of advocate Kholeka Gcaleka during her interview in Parliament on 13 November 2019 for the deputy Public Protector position.
Image: YouTube

Parliament’s justice portfolio committee endorsed Gcaleka for the position after she topped a list of seven shortlisted candidates. Gcaleka replaces advocate Kevin Malunga, who left the office in early December.

She joins the public protector’s office as Busisiwe Mkhwebane is fighting for her job amid a parliamentary process aimed at removing her.

“President Ramaphosa has wished advocate Gcaleka well in her new role and is confident she will execute the responsibilities before her with diligence and commitment,” said Ramaphosa’s spokesperson, Khusela Diko.

Gcaleka, who hails from KwaZulu-Natal, is a former special adviser in the ministries of the National Treasury and home affairs.

Her experience in the state is notable, having previously served as senior state advocate and senior deputy director of public prosecutions in the National Prosecuting Authority.

She became an admitted advocate of the high court in 2006 and is a former national chairperson of the Society of State Advocates of South Africa. Gcaleka is also a member of the Black Lawyers' Association.

When Malunga vacated office last year, he warned that his successor must not be “star-struck by politicians”.

As deputy public protector, he said, you have no job going to politician's parties or being “overly buddy”.

“You can’t have a situation where they buy you dinners, they buy you whisky, you go to their parties. You don’t do that in this role. I have a very polite and somewhat good relationship with people in the state but I will not be seen at their houses or at their parties,” he said.

His advice to his successor: “You've got to be a person of very strict principles. Don’t take gifts that will come back to bite you, and manage conflict of interest”.

He said “it is a powerful position” and whoever stepped into his shoes must do so wisely.

Gcaleka was nominated for the position by the ANC in parliament last year, despite objections from opposition MPs who pointed out that she was former finance minister Malusi Gigaba’s adviser when he was found to have lied under oath during the Fireblade Aviation case. She had worked as Gigaba’s legal adviser in the last two portfolios he held before he resigned from cabinet in 2018.

The ANC rejected this, stating Gcaleka was ahead of other candidates for the position of deputy public protector as she “has a legal background‚ has been dealing with trial procedure through criminal trials‚ has been involved in investigative nature of work and has been exposed to the criminal justice system as a whole.”