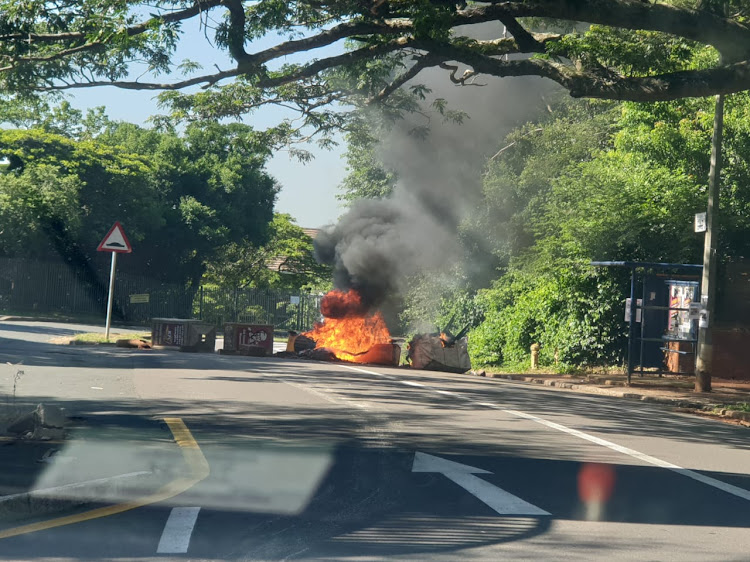 An additional four University of KwaZulu-Natal students have been arrested after unrest at the Howard College and Westville campuses on Wednesday.

Two were arrested on Monday when student protest action started at the Howard College campus.

The arrests come after the security control centre at the Westville campus was petrol-bombed and DSW bins set alight at Howard College on Wednesday.

According to police, about 600 students were seen making their way to the building with petrol bombs during the early hours of the morning.

“The security guards fled and returned a short while later to find that the building had been set on fire,” said SAPS spokesperson Brig Jay Naicker.

A case of public violence and arson was opened with Westville police.

Hours later, at Howard College campus, a crowd of protesting students set bins on fire on Princess Alice Avenue, near the main gate.

A student's car was also set alight. This resulted in the arrest of the four students.

In a statement issued shortly after the two incidents, the university said: “It is regrettable that the university has had to deal with wanton criminal behaviour by protesting students since Monday this week. The university strongly denounces the criminality.

“Inasmuch as we respect the students' right to protest, there is no excuse for any act of violence and damage/destruction of valuable university resources and property,”  it said.

Unrest broke out at the university on Monday when students protested about financial exclusion and other funding issues.

“The majority of students have not been able to register because students are now required to pay 15% of their historic debt before they are cleared for registration.

“The argument now is that students do not have that money. Part of the battle here is the issue of financial exclusion,” Howard College representative council chairperson Mphathi Majola told TimesLIVE on Monday.

On Tuesday, the two students from the university and seven from Unisa appeared in the Durban magistrate's court on charges of public violence. They were released on R500 bail each and will be back in court on April 8.

Naicker said the situation was stable and that police were on scene.

Protest are spreading across the country as the South African Union of students intensify the call for a national shutdown at public universities. ...
News
2 years ago

Police fired stun grenades and rubber bullets as student protests kicked off at the University of South Africa in Durban on Monday.
News
2 years ago
Next Article