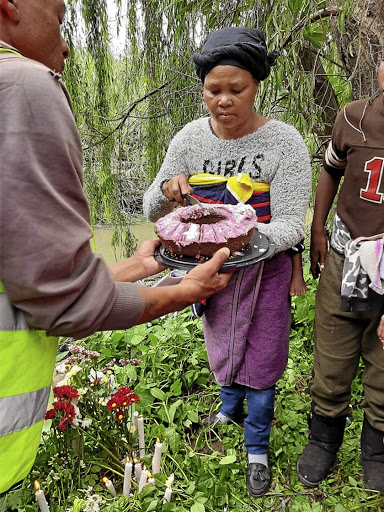 Leticia Jansen's grandmother Lynette Jansen bought a cake to celebrate Leticia's birthday at the place where she was murdered on Saturday./SUPPLIED

The past week has been overwhelming for the family of Leticia Jansen, 14, who was found murdered in Germiston on Friday after she went missing on Wednesday.

Her grandmother Lynette Jansen, 53, who raised her after her mother passed away, said the burden was heavy for the family.

"This has been a difficult period for the family, every time I close my eyes, I see Leticia's face. It seems like she is trying to reach out to me but I can't get what it is that she wants.

"On Saturday it was her birthday, so I bought two cakes and we went to the place where her body was found. One cake fell down and there was no wind. Maybe she is calling out to me. I wish she can give us a clue as to who did this horrible thing to her."

Leticia, who was a grade 9 pupil at Graceland Education Centre, went missing after she was left behind by a scholar transport. The family tried to open a case of missing person at the Germiston police station but they alleged that they were turned away.

Leticia's half-naked body was discovered by her family dog on Friday in an open veld not far from home. "We are still trying to come to terms with her death. We could not afford to give her the funeral she deserves and we were very lucky that EFF Ekurhuleni stepped in and arranged for my daughter to get a decent funeral," Jansen said.

EFF chairperson in Ekurhuleni in ward 35, Seipati Mashiane, said they could not just sit and fold their arms, they had to do something to help the family. "We have managed to get a few sponsors that will help the family with funeral arrangements.

"AVBOB Funeral Services have also agreed to help with the coffin and securing a grave site for the family. We are worried about that open space (where Leticia was found), the grass is long, which makes it a hiding point for criminals."

The family of a 14-year-old girl who was found dead on Friday say police turned them away when they went to report her disappearance last week.
News
1 year ago

Vusi Dladla from AVBOB confirmed that they will help the family with the coffin and other funeral services. "Our branch from Germiston has already spoken to the family."

Education MEC Panyaza Lesufi visited the school yesterday and said "it was clear that the school did not care about the lives of its pupils".

"The school was notified on Thursday about the missing [pupil] but failed to act. A child has not been in class for three days and the school was not aware and they didn't know she has died and I am the MEC and I had to tell them."

He also condemned the school for changing the bus schedule without informing parents. "You just say we were at assembly and told learners, parents won't believe learners.

"You had to tell parents for them to approve, then you implement. These are some silly cost-saving exercises, you want the bus to leave early so that you take learners to school and use the same bus that I have paid for the entire day to go and take adults somewhere. We are going to act," Lesufi said.

Police spokesperson Brig Mathapelo Peters said no one has been arrested as yet but a case of murder has been opened.