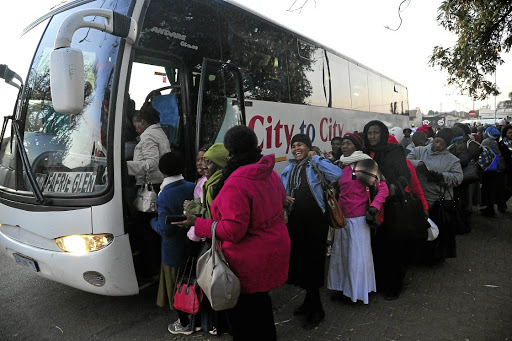 Autopax workers say the company is being run to the ground by management.
Image: Veli Nhlapo

Employees of Translux and City to City buses are facing a bleak future as the state- owned company is unable to sustain itself due to shrinking passenger numbers and financial losses.

The company, which failed to pay full salaries for 1,100 of its employees this month, suspended services of its lucrative Eastern Cape route two weeks ago. The non-payment of half of employees' salaries and the suspension of routes have placed the jobs on the line.

Translux and City to City operate more than 500 buses across the country in all 10 major cities and towns, with most of their long distance routes being between Gauteng and the Eastern Cape. The buses are run under Autopax, which is wholly owned by passenger rail agency of SA (Prasa).

Employees who were only paid half of their salaries this month told Sowetan that the bus services were being run to the ground by the management of Autopax.

Several employees said that the suspension of the Eastern Cape services at the time when people were returning to big cities was an example of how those in management were "willing to hand over passengers to competitors".

Cash-strapped state-owned bus company Autopax will not be able to pay full salaries to its 1,071 staff on Monday, acting CEO Tiro Holele announced on ...
News
1 year ago

The suspension, which came after a contract of a service provider rendering security services came to an end, has since been lifted. Employees who spoke on condition of anonymity said for five days Eastern Cape services which had some of the "most profitable routes" were suspended.

Sowetan established that the company had a fleet of around 500 buses, however, only around 100 were on the road.

"Even the same 100 that's operational right now, they breakdown very often because the maintenance of the buses is not being prioritized," an employee said.

He said often, their buses are late by as much as four hours. The company could now only afford to pay half of its employees' January salaries with the balance expected tomorrow.

Insiders at the department of transport and Prasa had taken a decision to close down the bus companies as they were unsustainable.

Sabela said Autopax was badly run, hence it was struggling to compete with other bus companies. "There are passengers out there but Autopax is failing them due to its poor service," Zenani said.

Prasa spokesperson Nana Zenani said the company is facing operational challenges and the minister of transport and prasa were working on finding a long-term solultion. She said a plan was being worked on to turn the business around.