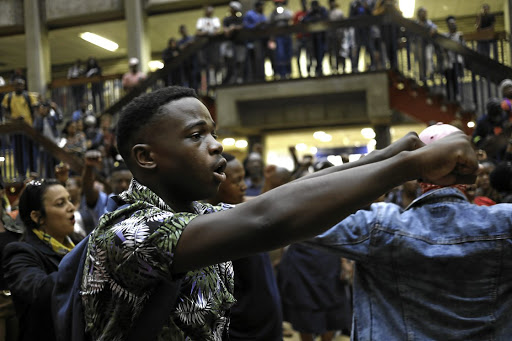 A fresh wave of protests at universities across the country is looming after students said their demands were being ignored.
Image: ALON SKUY

A fresh wave of protests at universities across the country is looming.

The South African Union of Students (SAUS) has accused minister of higher education, science and technology Blade Nzimande of not taking them serious.

Last week, SAUS delivered a memorandum of demands to Nzimande and gave him seven days to respond.

The union met on Saturday and decided that they would shut down universities "because that is the only language he understands".

SAUS national spokesperson Thabo Shingane said even though Nzimande responded to their grievances, his response did not address the issues they raised.

"As the South African Union of Students, together with Student Representative Council presidents and secretary generals have resolved on a national shutdown following the failure of the minister to respond positively to fundamental demands of students.

"We still have hungry students sleeping on the streets and the minister failed to address that issue," Shingane said.

He said Nzimande has merely responded for the sake of responding.

"He has not demonstrated any leadership and will to address our demands nor has he contemplated the extent to which he is undermining the registration period," Shingane said.

As government funding to universities and colleges has increased there have been efforts to “capture” institutions by external groups‚ sometimes in ...
News
1 year ago

"We demand revision of the department's bursary guidelines to include submissions made by SRC presidents last year, especially on off-campus students allowances and free sanitary towels for women students and that there should be food security for hungry poor students who are unfunded," said Shingane.

"The department is also working to develop a regulatory framework for university fees which will in the longer term ensure that fees are kept at affordable levels," Nzimande said.