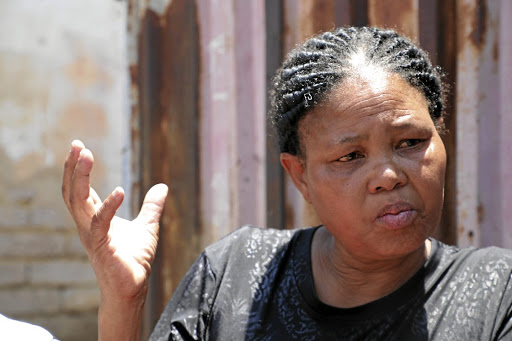 The family of a 14-year-old girl who was found dead on Friday say police turned them away when they went to report her disappearance last week.

Leticia Jansen, a grade 9 pupil at Graceland High School in Germiston, went missing on Wednesday after she was left behind by a scholar transport.

She apparently had to walk about 6km from Dukathole informal settlement to her school in Elspark.

According to her grandmother Lynette Jansen, 53, the teenager never made it to school and her two siblings who are at the same school came home looking for her.

"They thought she arrived late at school and found the gates locked and decided to return home," said Jansen, who raised Leticia after her mother died.

"I went to look for her at about 4pm and by 6pm, we went to Germiston police to report a case of a missing person. I was told to come back after 24 hours.

"I don't know how the police work but they failed my baby, maybe she was still out there crying for help."

A former Johannesburg Metro Police Department (JMPD) officer who served her children breakfast laced with poison and then shot them had turned to ...
News
1 year ago

Leticia's half-naked body was discovered by her family dog on Friday in an open veld not far from her home. The deceased's two brothers had gone on a search with the dog when they made the gruesome discovery.

The family suspects that she was raped and are waiting for the results of the postmortem to confirm this.

The distraught grandmother said the family was shattered by Leticia's death.

"We had to use a family dog to look for her because we were not getting any joy from the police.

"Our dog, Brown, found her lifeless body in an open space. They killed my child before her 15th birthday which was on Saturday," Jansen said.

"The police failed us. When we got to the scene, she was still bleeding.

"Her face was swollen and when they carried her, it seemed as if all her bones were broken.

"She was only wearing one side of her grey pants and her white shirt was pulled closer to her face showing her breasts.

A family of a man who was killed, allegedly by undocumented foreign nationals, in Diepsloot, has distanced itself from the violent protest that ...
News
1 year ago

"If the police did their job, maybe they were going to find her alive."

"I will ask the provincial police to lift the case so that it is handled by the province.

"I am truly shattered by this barbaric act.

"The principal will also have to respond as he is the one who gave permission for the bus to leave earlier than usual and I heard that the gates were also locked for all the pupils who arrived late," Lesufi said.

Police spokesperson Brig Mathapelo Peters said a case of murder has been opened.

She said the nature and extent of injuries sustained by Leticia will be confirmed by a postmortem. Peters said in the meantime the Family Violence, Child Protection and Sexual Offences (FCS) unit will prioritise the investigation in line with SAPS stance to attend urgently to cases of gender based violence.

"Management of the SAPS in Gauteng have noted with concern allegations of police not having followed correct procedure when the deceased was reported missing," she said. "An urgent departmental investigation will be conducted to look into the allegations."