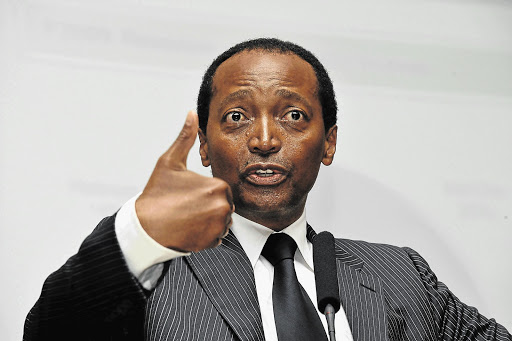 Patrice Motsepe sat among some of the greatest minds in business at the World Economic Forum.
Image: ROBERT TSHABALALA

These were the words of billionaire businessman Patrice Motsepe that have caused a stir on social media. Motsepe was sitting among some of the world's most influential businessmen, including US President Donald Trump, at a dinner at the World Economic Forum (WEF) in Davos, Switzerland.

In the viral video, Trump speaks glowingly of the businessmen at the table, and asks them to introduce themselves.

Not all tweeps agreed that Africa loves America, and while some came to Motsepe's defence, there didn't seem to be agreement on the issue.

So did folks think Patrice Motsepe and Cyril Ramaphosa became billionaires in South Africa by telling racists the truth? ?

What Motsepe did was uncalled for; you can't go anywhere in the world and speak on half of an entire continent. Every country has its own President & international relations representatives that can speak for themselves

His utterances are dangerous and very irresponsible pic.twitter.com/wHTyPJirg6

People worried about what Motsepe said but they themselves worship Americans everyday. Their culture, celebrities, entertainment etc. Start with yourself first before bashing him. You love America and Americans.

Motsepe has some truth. Love is not just a feeling but also acts of reverence and honor. African leaders revere imperialism and capitalism.

Black South Africans who became Billionaires post 1994, did it at the expense of the Rest of South Africans! Basically sold out! Now they want to extend the nonsense to the rest of the continent! Patrice Motsepe DOES NOT speak on behalf of Africans. Motsepe LIED! #PatriceMotsepe

Patrice Motsepe doing everything he can to make sure Africa is never involved in World War 3! I stan?? pic.twitter.com/T41UoyLDQo

According to Patrice Motsepe the whole of Africa including South Africa loves Donald Trump. He told this to Trump in his face. #PatriceMotsepe #DonaldTrump pic.twitter.com/uzTicVUOVf

Patrice Motsepe is very intelligent and knows why he said what he said as a business man so liberals and commi bandits must just sit down pic.twitter.com/zaB7aWasu0

For sure when Patrice Motsepe said Africa loves Donald Trump he was referring to Africa Rainbow Minerals (ARM) not my mother continent. pic.twitter.com/0muG2azNfD

Aowa Patrice Motsepe who send to go tell @realDonaldTrump that Afrika love him? Which Afrika? Please papa count me out if your sibara send you to say this he is completely lost Afrika does not love killers pic.twitter.com/fN1LQ2uaoV