Luxurious Jaguar used as bribery 'in exchange for eThekwini tenders' 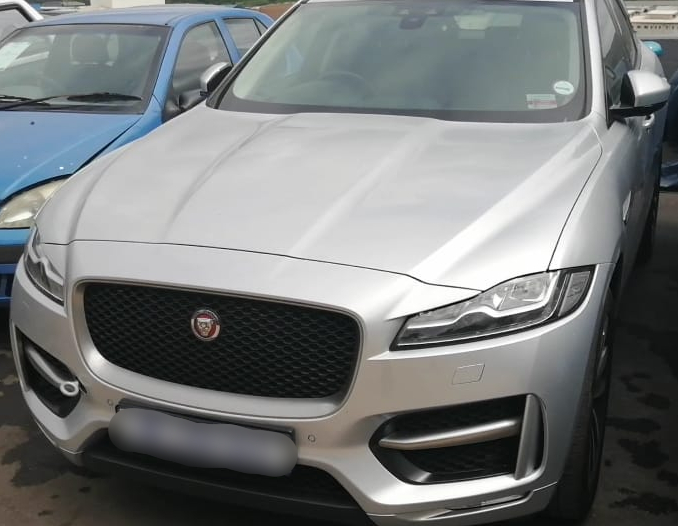 The silver Jaguar F-Pace SUV that three Durban businessmen are accused of purchasing for senior eThekwini official Sandile Ngcobo and his wife. The vehicle was seized by members of the Hawks and assets forfeiture unit in Durban in October last year.
Image: Orrin Singh

A Jaguar F-Pace SUV, valued at R1m, was allegedly used as a means of bribery to secure certain work and tenders within eThewkini municipality by three Durban businessman.

This was revealed at the Durban Commercial Crimes Court on Friday when five people, including the deputy-director of supply chain management at eThekwini municipality, Sandile Ngcobo, appeared on charges of corruption, money laundering and contravening the Prevention of Organised Crime Act.

The smartly dressed accused appeared in the dock with Sibisi donning dark sunglasses, which he removed as proceedings got under way.

The court heard that Dludla, Sibisi and Blose had purchased a Jaguar F-Pace SUV from CMH Jaguar Land Rover in Umhlanga on November 3 2017 for Ngcobo and his wife in exchange for tenders.

The vehicle was just one of a handful of luxury cars seized by the Hawks in a raid, with Sowetanlive'S sister publication TimesLIVE in attendance,  at the homes of the accused on October 10 last year.

Dludla and Blose - under the auspices of their companies Sibiya General Business traders (accused 4) and Jobe and Sons Holding (Pty) Ltd (accused 5), which have been served with summons in the case - together with Sibisi are alleged to have deposited  R600,000 into the account of CHM Jaguar and used a BMW 320i as a trade-in for the purchase of the luxury vehicle.

Public prosecutor Hazel Siraramen told magistrate Melanie de Jager that the accused were facing a schedule-five offence in which the state alleges that Dludla, Blose and Sibisi acted in common purpose by purchasing a new Jaguar F-Pace for the Ngcobos "in exchange for work and tenders to be granted in eThekwini municipality".

Siraramen said at the time Ngcobo was the chairperson of the eThekwini municipality bids and awards committee.

In court papers the state has accused Ngcobo and his wife of accepting a benefit amounting to corruption.

He is accused of abusing his position of authority, a breach of trust and the violation of his legal duty or set of rules in this regard.

The state was not opposed to bail, set at R10,000 per accused, but rather imposed a stringent set of conditions which stated that the accused:

Ngcobo's wife and Blose were also ordered to hand over their passports by the close of business of Monday.

The accused were all granted bail and the case was adjourned to February 25.

The the vehicles of the co-accused of #ZandileGumede which were seized by the state today. None of these vehicles belong to #ZandileGumede but rather to some of the 15 others she has been implicated with in a dodgey 2016 R208m DSW tender deal. @TimesLIVE @SundayTimesZA pic.twitter.com/tXe4O3JGTx

Ngcobo and Dludla are two of the 15 people who were arrested in May last year, alongside former eThekwini mayor Zandile Gumede, in connection with the irregular DSW tender. Ngcobo was granted R50,000 bail and stringent bail conditions with regard to his interaction with staff at the municipality.

They appeared alongside their co-accused on Wednesday last week on charges of corruption, fraud and violating the Municipal Finance Management Act.

Senior state advocate Ashika Lucken said during a search and seizure operation by the National Prosecuting Authority's asset forfeiture unit in October, documents were found at Ngcobo's home related to the DSW tender.

MTN accused in US court of paying 'protection money' to terrorists

Telecoms giant MTN on Monday said it was reviewing allegations raised in a US complaint that accuses several firms of paying protection money to ...
News
1 year ago

Transport minister Fikile Mbalula has condemned lawlessness on the roads - by those who are paid to uphold the law.
News
1 year ago

Western Cape employee arrested for lying about being robbed of boss's R560,000

A 39-year-old Western Cape man was arrested for perjury after lying about being robbed of over R500,000 by police officers.
News
1 year ago
Next Article