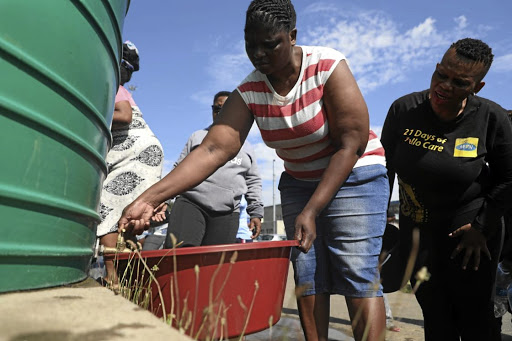 Minister Lindiwe Sisulu has announced several interventions which include injecting R220m to address the water crisis in QwaQwa and surrounding areas in the Free State.

Sisulu made the announcement accompanied by deputy minister of cooperative governance and traditional affairs Parks Tau, her deputy David Mahlobo, church leaders and leaders of the shutdown.

The shutdown had earlier been suspended following a lengthy meeting between angry residents and government.

Sisulu said the government will bring 5,000 jojo tanks to the area in the next seven days to address the water problems.

Boreholes will be equipped to provide further relief and a hotline and a task team has been set up to monitor the progress of government's intervention.

"We are particularly concerned with the water crisis in the area and we have made an undertaking to make sure we assist the community. Water is life and our people deserve to be supplied with clean and quality water," Sisulu said.

But these have been rejected by the organisers of the total shutdown, who are complaining that they still do not know when water will run in their taps.

"They are temporary. They do not address the long-term water problems that we have as community," said organiser Scotch Sikhosana. "The people of Maluti-A-Phofung have said enough is enough with jojo tanks. The people want running water in the tap. "They must give us a permanent solution that tells us when water will be running from out of taps."

The total shutdown of Phuthaditjhaba and surrounding areas in QwaQwa, which started on Monday over water, has been suspended. Organisers of the ...
News
1 year ago

A mother has laid bare her anguish and pain after her child drowned while fetching water from a river in QwaQwa, Free State.
News
1 year ago

Water has been a problem in the area for over a decade now.

Residents of Maluti-A-Phofung that encompasses QwaQwa, Harrismith and Kestell took to the streets in a three-day shutdown where they barricaded roads with burning tyres and rocks, demanding water. The protest was fuelled by the death of seven-year-old Mosa Mbele, who drowned while she and her sister were fetching water in a river.

"We are glad the minister came and addressed the problem with residents. We certainly hope this would benefit the residents in future," Oates said.

EFF regional secretary Mohau Molwelwe said they are doubtful Sisulu's plans will succeed. "We know the money would be directed to wrong channels and corruption would be the order of the day. We know the leaders are going to take the money and give to their friends and family."

Sisulu is expected to return to the area in six weeks to check progress.