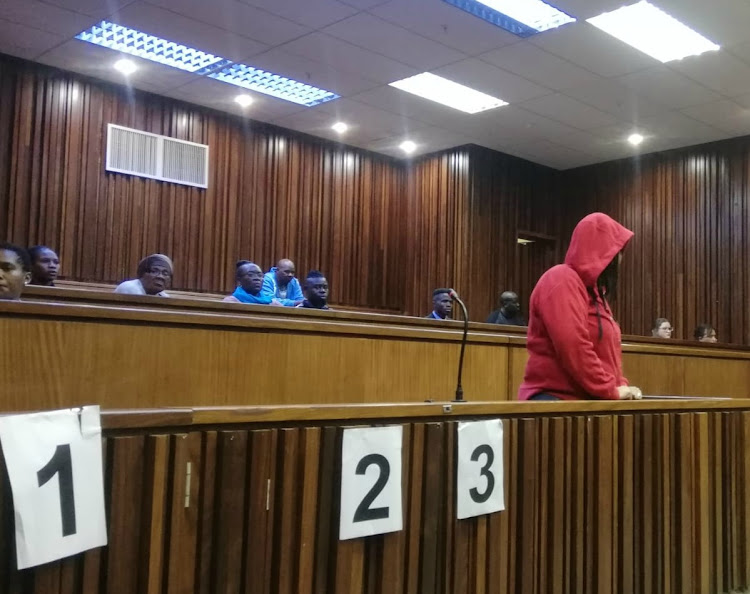 The mother, who was dismissed from the JMPD after shooting her children, appeared in the high court in Johannesburg on January 24 2020.
Image: Nonkululeko Njilo

A former Johannesburg Metro Police Department (JMPD) officer who served her children breakfast laced with poison and then shot them had turned to drugs after the death of her husband.

The tragic sequence of events leading to the death of the children, and conviction of their mother on charges of murder and attempted murder, was revealed at the high court in Johannesburg on Friday at a pre-sentencing hearing.

The officer was arrested in January 2018, while employed at the JMPD in Gauteng, after having served her children a potentially lethal breakfast. Shortly after they had eaten, she shot them both in their stomachs.

They were treated for poisoning and gunshot wounds in hospital. The younger child succumbed to injuries and the older one survived. SowetanLIVE has elected not to name the mother in order to protect the identity of the surviving sibling, who is a child victim of crime.

The mother, the court heard on Friday, had no recollection of events leading up to the shooting.

“A night before the incident she smoked marijuana and crystal meth. She does not know what happened as she woke up in hospital and was told she had poisoned and shot her children," said a probation officer's report presented to court.

The report stated that she started using drugs in 2014, shortly after losing her husband, whom she considered to be her "best friend".

She said she could not cope with his death but had to be strong for the children.

"The accused person she said felt she was over-compensating and did everything in her power for her children not to feel their dad was no more," read the report.

Their ages proved no obstacle to justice as, with the help of their testimony, the Port Elizabeth high court this week sentenced a 51-year-old child ...
News
1 year ago

The probation officer said the surviving child was severely affected by the arrest of the mother.

"The child stated that [they] felt [they] had no reason to live because [the sibling] was no more and [the] mother had been incarcerated."

The older child was coping at school but had seen a decline in marks.

Although the former officer's family had forgiven her for what she did, they blamed themselves for not providing enough support.

“They believe the offence would have not have been committed if she did not lose her husband or had spoken about her feelings, and if they gave her enough support,” said the probation officer's report.

The court also heard the mother had been diagnosed with depression.

Colleagues described her as a hard worker who was always on time but who kept details of her personal life to herself.

The judge postponed the case to January 30.