TUT turns away scores of students 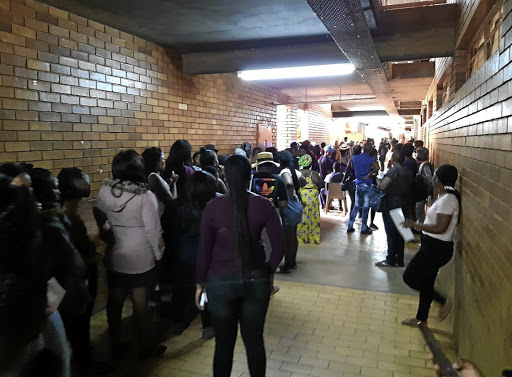 Hundreds of students were left frustrated at the Tshwane University of Technology's Soshanguve campus after they were turned away without registering yesterday.

The students, who had formed long queues at the campus, were provisionally accepted to the university last year but when they arrived they were told their courses were full. Some had travelled from afar.

The most affected were new students who stood in long queues since early in the morning but were turned away at 2pm.

A number of returning students were also affected as many were made to sign an acknowledgment of debt, mainly because the National Student Financial Aid Scheme (NSFAS) had failed to settle last year's tuition fees.

Sowetan saw an acknowledgement of debt signed by a third-year student who had been "blocked" from registering.

The student, who owes the institution more than R24,000, told Sowetan that NSFAS, which has been funding her since first year, had somehow not settled her tuition fees.

"Apparently I'm blocked and for me to be unblocked I needed to sign and acknowledge that I owed TUT, which is unfair because NSFAS is funding me. But I was left with no choice but to sign," said the student who did not want her name to be published.

An urgent meeting between the deputy vice-chancellor and the student representative council at the Soshanguve campus was held in the afternoon to try find a solution to the problem.

Accommodation for over 30,000 TUT students

Some to be housed in safe backrooms.
News
1 year ago

TUT spokesperson Willa de Ruyter said it was normal for acknowledgment of debt to be signed where outstanding fees had not been settled.

"I wouldn't call what happened today chaos but I know there were issues today... It's normal for acknowledgement of debt to be signed and when NSFAS pays that debt is settled," De Ruyter said.

De Ruyter said there's always a limited number of spaces available at the start of the year.

A student from Newcastle in KwaZulu-Natal was stuck at the institution's premises by late yesterday afternoon without accommodation after she had apparently lost last year's student card.

The registration chaos has become an annual occasion at this institution. Last year saw similar scenes, including protests by students.