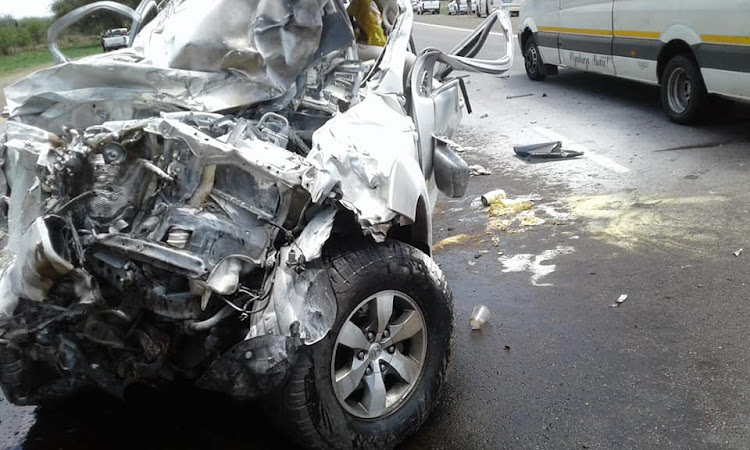 A Toyota Fortuner involved in a head-on collision with a minibus in Limpopo.
Image: Arrive Alive

Transport minister Fikile Mbalula says the number of people losing their lives on the roads is “alarming” and cost the economy more than R168bn in the past year.

“At the beginning of the festive season we set ourselves a target of reducing road crashes and fatalities by 10%. We have made substantial progress towards the realisation of this target,” he said.

The biggest reduction in fatalities was in the Free State, which saw a 35% decline, followed by Mpumalanga with a 23% decline.

The Passenger Rail Agency of South Africa has in the past two years lost almost R1bn to train fires, vandalism of power stations, public disorder, ...
News
2 years ago

“Our analysis demonstrates that the main causes of fatal crashes over this period were pedestrians,” he said.

The festive season campaign saw an increase in roadblocks conducted across the country — from 775 the previous season to 1,924.

Mbalula said more than 573,147 motorists were issued with traffic fines at these roadblocks. The number of traffic fines issued decreased by 191,862 as a result of increased compliance with road regulations by motorists.

“Our analysis demonstrates that we have made progress, we can see a flickering light at the end of the tunnel ... however we are still a long way from celebrating, and more still needs to be done before we can declare that we have turned the corner. Too many people still die on our roads,” he said.

Though there was increased law enforcement visibility over the festive season, Mbalula said the cleanup campaign was marred by poor weather.

“Our festive season campaign was robust and inspiring, it was also hurt by heavy rains in the second half of December and early January,” he said.

Mbalula said light vehicles were involved in most fatal crashes (42%), followed by light delivery vehicles (20%) and minibuses or kombis at 9%

“The fact that minibuses contributed to less than 10% of the fatal crashes confirms the success of Operation Hlokomela, which is an urgent initiative of the taxi industry and again shows that law enforcement operations focusing on public transport are bearing results,” said Mbalula.

He applauded law enforcement officials who gave up family time and showed commitment towards making the country's roads safe.