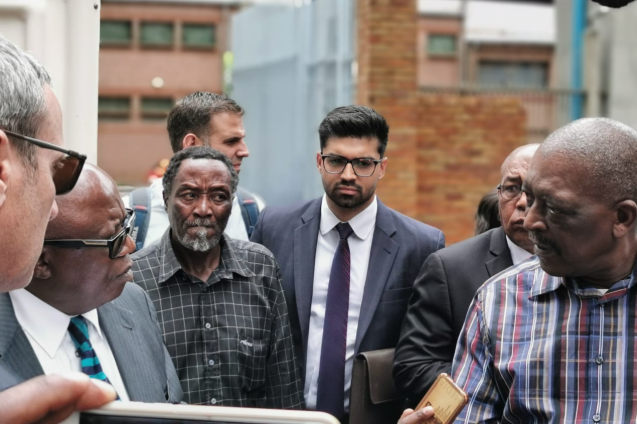 The team conducted a tour of Johannesburg central police station, where the anti-apartheid activist was found hanged in his cell in 1982

It is hard to believe that during apartheid the now frail Mahanoe Makhetha wore a police uniform, collected political prisoners from their cells and accompanied them to the 10th floor of John Vorster Square, where they were handed over to security branch police officers for interrogation and torture.

On Tuesday, as part of a fresh inquest into the 1982 death of Dr Neil Aggett, Makhetha and another former police officer, Joe Nyampule, walked lawyers down the corridors of the infamous Johannesburg central police station, formerly John Vorster Square.

Makhetha told judge Motsamai Makume that sometimes he would wait for the interrogations to be completed and then lead the prisoners back to the cells.

The prison system has changed since democracy, but the building still stands and prison life continues behind its high walls.

On the ground floor of one of the wings, a cleaner polished the corridor floors with an electric buffer, ensuring they kept the shine they held back then.

“Only one lift went to the 10th floor at the time,” Makhetha told the lawyers.

The inspection team arrived on the second floor, where prisoners were registered, searched, stripped of any potentially harmful belongings and allocated a cell. On a blue noticeboard in the area were new and old notices. The old ones, on white paper, had turned brown.

“Suspects must be searched before entering the cell complex. Members who do not comply with the instruction will be charged,” read one.

The Desmond & Leah Tutu Legacy Foundation has welcomed the re-opening of an inquest into the death of anti-apartheid activist Dr Neil Aggett while in ...
News
2 years ago

As the fresh inquest into 1982 death of trade unionist Dr Neil Aggett, who died while in police custody, started on Monday, his family has called on ...
News
2 years ago

It was notices such as these that led Aggett's family to disbelieve he was able to enter his prison cell with a piece of material or scarf that he could have used to hang himself. They believe Aggett was murdered.

A putrid smell lingered as the door leading from the charge office to the cells was opened. It was indescribable and badly masked by cleaning chemicals used on the shiny floors.

“This place is evil. It is painful to be here. Absolutely evil,” Jill Burger, Aggett’s sister said during the inspection. It was her first visit to the cell where her brother, a trade unionist and anti-apartheid activist, died after 70 days behind bars. He was never charged. Several others like him lost their lives behind the prison walls.

For Tuesday’s inspection, the prisoners occupying the cell in which Aggett had died were moved to others. Police officers stood at the doors of the cells, obstructing the key holes that would otherwise give prisoners a view of the entourage.

Jabulani Ngwenya, who was imprisoned about the same time as Aggett, told the team that police used to block the doors in a similar fashion when they wanted to prevent them from seeing what was happening outside. However, he said he recalled seeing Aggett during their incarceration. At one point, he was being led down the passage. Ngwenya said during his time in detention his senses grew sharp and when he slept near the entrance of the cell he could tell by the smell, or even footsteps, whether a black or white officer was approaching.

Ngwenya, Makhetha and Nyampule are among those expected to give evidence during the inquest. An inquest in 1982 found no one responsible for Aggett's death. It was ruled a suicide. The new inquest seeks to uncover the truth behind the then 28-year-old doctor’s death. It continues in the high court in Johannesburg on Wednesday.