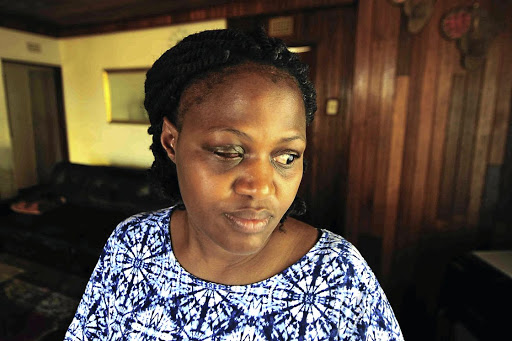 Sonto Radebe lost her eye after an abusive ex-boyfriend stabbed her. /Thulani Mbele

A woman who lost her eye after being stabbed multiple times allegedly by her ex-boyfriend has recalled how her former lover abused her repeatedly.

Sonto Radebe, 37, took the stand in the Roodepoort magistrates' court yesterday in the trial of her ex-lover Linda Makhanya.

Makhanya is facing charges of attempted murder, rape and theft after he allegedly stabbed Radebe in two separate incidents.

Radebe agreed to be named even though she is a rape victim. She told the court that she had advised Makhanya to seek counselling to help him with his abusive tendencies before he attacked her.

She said she broke up with Makhanya due to his violent nature, but they were planning on getting back together if he agreed to undergo counselling. Makhanya has pleaded not guilty to all the charges he faces.

Radebe told the court that after she moved out of Makhanya's home in July 2017, the pair had seen each other on two occasions - once when he followed her to her new place and the second time when he went to apologise for the abuse he had put her through.

Woman recalls how she lost her eye

A woman has relived the violent attack that led to her losing her eye after she was stabbed multiple times by ex-boyfriend.
News
2 years ago

The Soweto woman who lost vision in one eye after she was allegedly stabbed by her ex-boyfriend fears she could soon become a statistic in the ...
News
3 years ago

"He wanted us to get back together but I refused and told him that we would both need to undergo counselling because we had been through a lot as a couple," Radebe said.

She said she needed counselling to overcome the trauma that she experienced as a result of the abuse in the relationship, while Makhanya needed to overcome his short temper.

"Once when we were talking on the phone, he said he was attending counselling at Brothers for Life [an organisation that promotes positive male norms] in Joburg, but he didn't say where," she said.

She said that even though their break-up was mutual, she felt that she had endured enough abuse because her ex-boyfriend often assaulted her.

Radebe also told the court that she did not know how he learned about her whereabouts when she moved out of his place.

"When we broke up, I did not tell him where I was moving to. I was living with him at his parents' home and decided to move out after we broke up because he was abusing me," Radebe said.

"But after moving out, I realised that I had forgotten my TV remote and a few other items, so I needed to go collect them.

"I didn't realise that the accused was following the vehicle I was using to move those items to my place of residence."

Radebe previously told the court that her ex-boyfriend choked her until she lost consciousness before raping her in her home.

The matter was rolled over to January 29 when further testimony is expected to be heard.