Hope for girl (8) with rare disease to start schooling 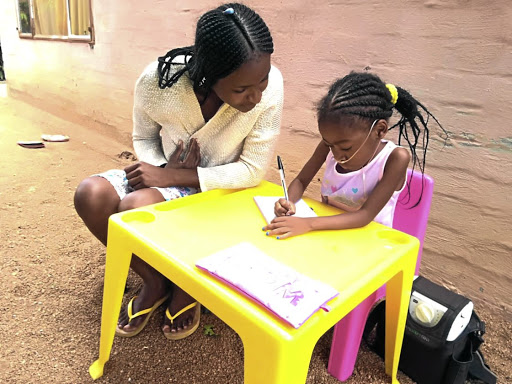 An eight-year-old girl with a rare disease is stuck at home and hasn't been to school for two years.

Onkarabile Mamorobela, from Hammanskraal, north of Pretoria, suffers from a chronic respiratory problem, a rare disease which is not curable. She depends on an oxygen ventilator to survive.

She was forced to stop attending Hammanskraal West Primary School in 2017 due to medical complications.

Onkarabile relies on a portable oxygen machine with pipes that are permanently attached to her nose, limiting her movement.

Her mother Tumelo Mamorobela said officials from the department of education had promised to find a special school to accommodate her. "They promised to place my daughter in a school that will accommodate her medical condition," she said.

Mamorobela said all primary schools in Hammanskraal don't want to admit Onkarabile as they feel they wouldn't be able to cope with her condition. "They all told me to take her to a special school," she said, adding that there was no such school in the area.

For Precious Moilwa, every scheduled electricity outage could be her last breath.
News
1 year ago

Mamorobela is worried that her daughter is missing out on crucial early development education and feels that normal schools should be able to accommodate her.

Gauteng department of education spokesperson Steve Mabona said officials visited the child in October to assess her situation with the intention of identifying a school that can accommodate her based on her needs.

"Following the visit by our officials, the case was referred to our district psychologist. [But] she is currently hospitalised and has undergone surgery. The aim was for her to identify a school," Mabona said.

Following Sowetan's questions to the department, Mamorobela got a phone call to report for a meeting at New Hope School, one of the largest schools for children with special needs, on Thursday.

She was asked to bring her child's medical report, last school report, birth certificate and a copy of her ID.