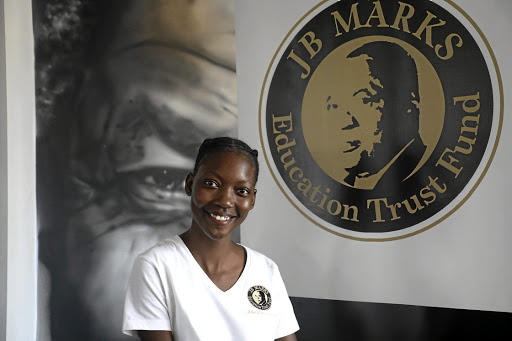 Kgomotso Mohlala, 17, is a beneficiary of the JB Marks Education Trust Fund bursary from the National Union of Mineworkers. She aims to study medicine at Medunsa. /Thulani Mbele

Kgomotso Mohlala battled anxiety and depression in her matric year before she landed a fully paid bursary to bring about her dream of becoming a medical doctor.

Mohlala, 17, is part of 200 children of National Union of Mineworkers (NUM) members who have been granted a bursary provided by the union and the JB Marks Education Trust Fund to break the cycle of poverty in their families.

They are currently attending a workshop in Midrand to prepare them for university.

Born in Phalaborwa, Limpopo, Mohlala received four distinctions and is currently waiting to hear if she has been accepted to study medicine at Sefako Makgatho Health Sciences University (Medunsa) or a BSc degree at University of KwaZulu-Natal after losing out on a placement at University of Cape Town and Stellenbosch University.

"I am really anxious about it but I am hoping for the best. Even if I have to first do a BSc, I will do it because I really want to be a doctor," she said.

Mohlala said her mother used to be a domestic worker before she furthered her studies to get a diploma in Educare while her father is an operator at a mine in Limpopo.

Former Lily mine workers believe they are on course to retrieve the remains of their three colleagues after they discovered what they believe are ...
News
2 years ago

"Life was really hard for our family, which is why my mother decided to study further. They are now able to take care of all of us," she said.

Mohlala said she was inspired to go into medicine because of her late brother.

"My parents told me that they named me Kgomotso because I wiped their tears after my brother drowned. They told me he wanted to be a doctor, and to me it is an honour to follow in his footsteps. I know it is still important for me to follow my own dreams and luckily this also became my dream," she said.

Mohlala does not have to worry about losing out on her bursary even if she does not get accepted this year. The trust allows for prospective students like her to take up the bursary the next year. "I want to specialise in paediatrics because I love children with all my heart."

Meanwhile, Tshepo Moilwe, 22, is in his final year and is studying towards his mechanical engineering degree at the Central University of Technology in Free State.

He told Sowetan that he was relying on the National Student Financial Aid Scheme (NSFAS) before he applied for the bursary. "It's really cool not having to worry about funds. I can just focus on landing an internship after I graduate."

Moilwe said he wants to be an innovative mechanical engineer who designs car engines.

NUM general secretary Kolekile Sipunzi said it's important to be involved in this programme to change the lives of poor families, particularly mineworkers. "This goes a long way in assisting government in terms of education because people look towards NSFAS, which cannot be in the position to help each and every student. I wish other trade unions can follow suit."