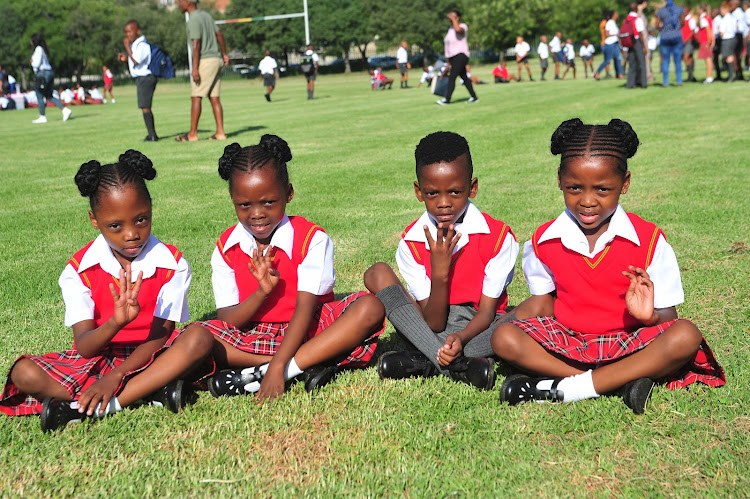 The first day of school is an exciting yet anxious day for most children.

Though parents are often around it is a day most children go through solo.

For the Mokobe quadruplets of Welkom, Free State, it was different, going to school with somebody they've known their whole life certainly took the anxiety out of it but not the excitement.

The quartet consists of Tshimologo, the oldest, and his sisters Omphile, Onthatile and last born Oarabile.

Sowetan first met the quadruplets at their home in Las Vegas in Thabong township on Tuesday, a day before their journey to school started. 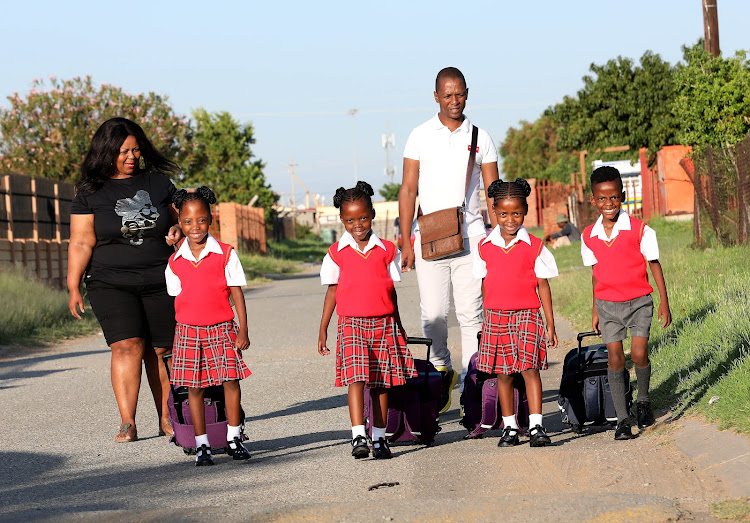 The girls, dressed in matching red vests and black shorts quickly drew the eye. All four children cavorted energetically next to our car with Tshimologo running on the walkway to direct us to his home.

Inside, we are greeted by three purple lunch boxes with the images of Elsa and Anna from the Disney phenomenon Frozen and a blue lunch box with a picture of Spiderman on it.

The colour scheme is echoed in the four wheeled backpacks standing against the wall just waiting for little hands to take them to school.

"We've been individually labelling each of their school stuff since [Monday]. Even now we're still busy, it's a lot of work," says mom Yvonne Mokobe.

The family started preparing for the first day of school in September by buying uniforms first.

We find the kids so excited about starting school that they keep asking when they would begin school since they already have the uniform.

Though the children will be attending the same school but they will not be in the same class. 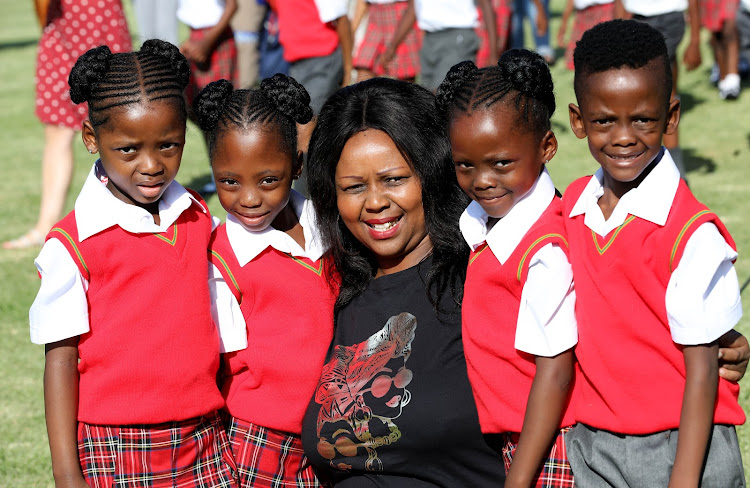 The quads have been paired and placed in two different classes, something they had gotten used to at creche as well.

The move also offers opportunities for them to make friends as they don't have any at home and keep one another company.

Tshimologo is content to let his sisters take the lead as he stands close to his mother.

Sofia the First is a cartoon character.

Mom Yvonne, 37, and dad Lebo, 42, were shocked in 2013 on discovering that they would be having quadruplets.

"We didn't believe the doctor when we were told that it was not a single pregnancy. It was only when I went to my gynaecologist for a second opinion that we found out that we were having quadruplets," she says.

The babies were born premature, at six-and-a-half months into the pregnancy.

"They were so small... but I got help [to take care of them] from my mom, other members of the family and my husband," recalls Yvonne.

The general mood in their home on Tuesday was one of excitement but Yvonne admitted to feeling anxious.

We reconnected with the Mokobe family yesterday morning, to find the house a hive of activity. The quadruplets were getting dressed with the help of grandmother Puleng Selekoe and mom and dad, except Oarabile who insisted on dressing by herself.

"Mama, are you going to put make-up on me?" Onthatile retorts as mom applies Vaseline on her face. 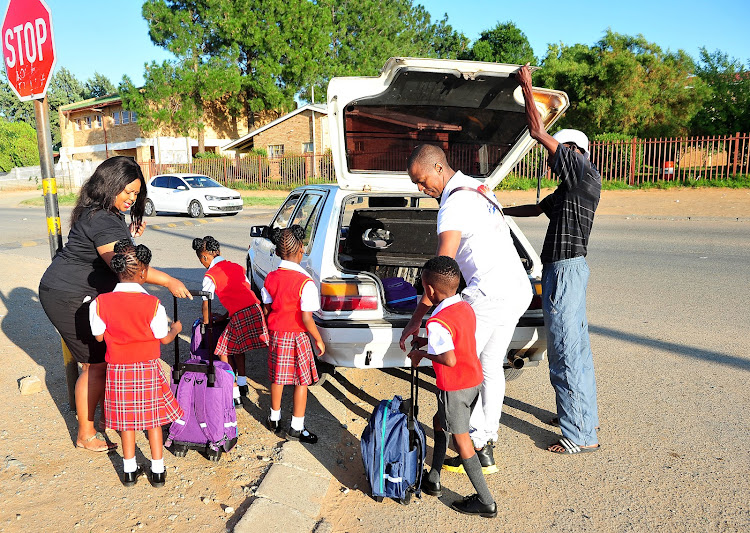 The quadruplets on their way to school
Image: Veli Nhlapo

"We're school kids now!" shouts Tshimologo, who is so enamored of his wheelie backpack that he keeps driving it up and down the passage.

The quads have loosened up a little and show more of their personalities, roaming about and asking questions of the Sowetan team. Omphile, who has been quietly tracking photographer Veli Nhlapo, is startled at every click of the camera, and charges forth and asks: "What is this? What does it do?"

As she reaches out an inquisitive finger to touch the lens, she withdraws it in a flash her hand at a slight chiding from her father.

The kids drag the backpacks on the tar, creating a cacophony of sound that had all the neighbours looking and a few dogs barking. They're catching everybody's attention and garnering well wishes for their first day at school.

The quads are famous in the street where they live. A neighbour shouts how well they looked in their uniform.

I'm so proud of them

"I'm so proud of them," declares granny proudly as the entourage makes its way to Dagbreek Primary School in a cab.

At school they get acknowledged by the principal and there is a photo opportunity. Their parents see them to their classes and all seems well.

The journey through school has just begun for the four and for the rest of the family.

Their father declares he wishes he had a new house so the kids can enjoy their own space as they share a room with their grandmother.

"It is by God's grace [that we are able to raise them]. It is difficult but we try to cope... We can't afford a loan for a [bigger] house and we don't qualify for an RDP house because we work for the government.

"We just thank God that we are still coping by His grace and we [continue] to put our trust in Him."

Dad hopes someone will see their story and help the family.

The kids' uniforms and stationery cost the couple nearly R10,000 and that excludes the winter uniform.

The worry is their parents' salaries are just not enough to keep everybody going. Their mother is an admin clerk and dad is in the Defence Force.

After school the quads are slightly wilted and couldn't even say how their day went.

We did receive goodbye hugs, though.

Quintuplets are 'fun and a challenge to raise'

The Buthelezi quintuplets have all been discharged from hospital, with their health getting the final sign-off by doctors at the Clinix Botshelong ...
News
3 years ago

While the country celebrated the news of the birth of a set of quintuplets last week, a Johannesburg bride-to-be was reeling in shock after learning ...
Hot Topics
3 years ago
Next Article