Herman Mashaba out to retrieve Lily Mine trio 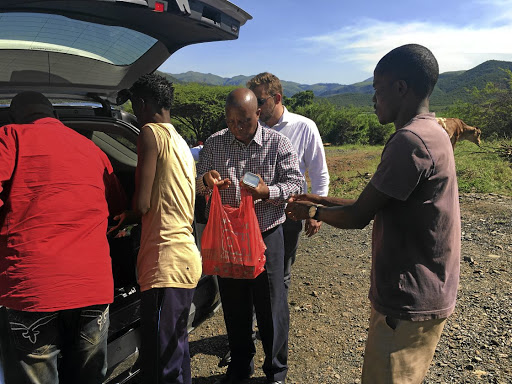 Herman Mashaba speaks to former employees of Lily Mine and family members of the three trapped miners in Louisville, outside Barberton, yesterday.

Former Johannesburg mayor Herman Mashaba has pledged money to help the families of three mineworkers who are still trapped at Lily Mine, outside Barberton in Mpumalanga.

He said he would foot the bill to force the government and Vantage Gold Fields to retrieve the three miners.

Pretty Nkambule, Solomon Nyarenda and Yvonne Mnisi disappeared on February 5 2016 when the mine collapsed while they were working in a lamp room container that was swallowed by the ground. The three safety officers were never found.

Their families have been camping outside the mine since April last year.

Mashaba, who was approached by family members of the miners, the community and former employees of the mine, said he would get top lawyers in the country to work on the case.

"I'm grateful and proud of these South Africans that are taking our democracy seriously. We really need such people who don't take things for granted. Listening to them has made me commit to get my family to get them the best lawyers in the country.

Tshwane mayor Stevens Mokgalapa will know within a few days whether he still has a future in the DA.
News
2 years ago

The Democratic Alliance on Monday shot down a move by the Gauteng human settlements and co-operative governance MEC, Lebogang Maile to place the ...
News
2 years ago

"If government says they don't have the capacity in South Africa, then let them allow us to seek experts outside the country."

Mashaba was accompanied by former Gauteng police commissioner Deliwe de Lange on his visit to the area yesterday.

Former mineworkers and affected families said Mashaba had given them hope.

"Since the 5th of February 2016, we had many political leaders [coming here] but today we have a feeling that we are visited by a real leader," said Harry Mazibuko, spokesperson for the former mineworkers.

"People have promised us many things which were not done, but today Mashaba gives us a way forward and since we started this, we never had legal representation," Mazibuko said.

"This is step one in getting our colleagues out of that mine. This man is a very good leader, he has taken us forward now and soon we will meet the legal team for briefing."