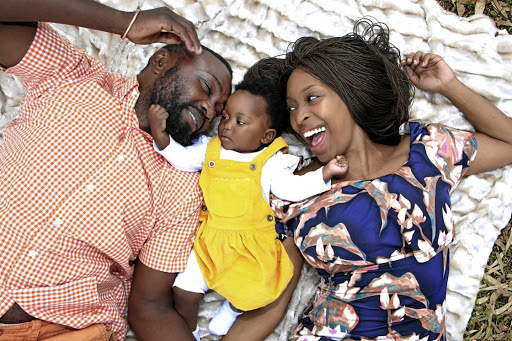 Actor Khabonina Qubeka is demanding millions of rands from a Johannesburg private hospital after her placenta was disposed of despite her request that it be kept for her.

When she gave birth to her daughter Lwandle in October 2018, the Isidingo star signed a legal agreement with the Life Bedford Gardens Hospital requesting to take her placenta home. Sowetan has seen the document in which she "refused the disposal by incineration [burning] or by other lawful means of human tissue".

Qubeka and her world-champion kickboxing husband Vuyisile "Master Vusi" Colossa wanted to keep the placenta for cultural and business reasons. But when she went back to collect the placenta a month after giving birth, it was missing despite the hospital's promise to temporarily store it for her.

Qubeka said when she went to obtain a hospital letter to present to the police so they can issue her with an affidavit to release the placenta into her possession, the hospital couldn't provide her with one.

The staff alerted her that they couldn't locate her placenta, therefore they can't provide her with a hospital letter.

"I felt the need to preserve my placenta because this was my first pregnancy and I have no idea if I will ever be pregnant again. So for me this was a chance to explore the full avenues of my pregnancy. A placenta is the child's blanket and culturally it benefits the child and the entire family.

Khabs shares her secret to losing the belly.
News
3 years ago

"I was told [by the hospital management] that we'll freeze it for you and when you are ready you can come get it..."

The hospital's lawyer, Ronald Bottin, has denied any accusations of negligence made by Qubeka. "In line of the internal processes and policies of Life Healthcare, the allegations surrounding the placenta of Ms Qubeka, after giving birth during October 2018, was investigated at various levels including hospital, operational and management level," Bottin said in an email statement.

"Having considered all the facts, we find no negligence on the part of the hospital. Ms Qubeka was required to complete and sign an affidavit for the safe disposal of human tissue by a patient, in order to collect the placenta after her discharge. Ms Qubeka did not complete the affidavit nor queried upon discharge the whereabouts of the placenta.

"As a result, the hospital is obligated to dispose of the placenta in an ethical manner as required in terms of legislation."

Colossa said the placenta was significant for him and his family to be used in Tsonga rituals. "You can cleanse the child traditionally if something happens to them," Colossa said.

"Some other cultures they plant it and then plant a tree to represent the life of the child."

The couple is in the early stages of developing a radio and TV production that is going to focus on health as well as wellness during and after pregnancy. The placenta was a big feature in the production.

"In terms of producing the kind of content that we were going for, we were looking at a production cost of between R10-million and R20-million, that's excluding the sponsors," he said.

The hospital management and the couple had a meeting in November 2018. Hospital manager Jacques de Klerk was in attendance. "That's where the strange reactions that they will fire whoever was involved started," Qubeka said.

"But we pointed out to them that we are not about that, that's your business, we are here to find out what is a way forward and is this how you treat a client? They were just saying things that were not dealing with the issues at hand."

After explaining the cultural and economic fallout the issue will have on their lives, they were asked by the hospital to send them a business study. In the study, Qubeka and Colossa proposed a R40m settlement agreement. However, Bottin later wrote a letter to them denying any liability.

Qubeka and Colossa have explored pursuing a civil lawsuit but decided against it. They then consulted with the Human Rights Commission, before CRL Rights Commission took on their case in October.

CRL spokesperson Mpiyakhe Mkholo confirmed they were looking into the case.

Coleen Rooney is eating her own placenta

Coleen Rooney has had her placenta turned into pills for her to take to help her recovery after giving birth to her third son Kit. The stunning star ...
Entertainment
6 years ago

Health trends come and go, but one post-birth fad is gaining a foothold in the United States among some new mothers who extol the benefits of eating ...
Good Life
7 years ago

Afterbirth is big business in beauty and health products

Placenta has many postnatal alternative benefits that range from health to beauty, not to forget pharmaceutical and other ritual consumption by many new mothers.

Placenta is the tissue that connects the foetus and mother during pregnancy - transferring nutrients and oxygen.A few years ago, Kim Kardashian West made headlines when she revealed that eating her placenta afterbirth was the secret to her postpartum health.

Chrissy Teigen and Khloe Kardashian have also been vocal about consuming placenta pills after giving birth.According to American Pregnancy Association, placenta encapsulation is an ancient tradition traced back to Chinese medication. It says the practice often entails "ingesting the placenta after it has been steamed, dehydrated, ground, and placed into pills."

According to The Conversation one placenta can yield between 100 to 200 capsules.In the beauty industry, placenta is worth billions and it's often regarded as the secret to the fountain of youth.

It's used in hair and skin products as well as health tonics. In SA, placenta products cost between R450 and R2,150.