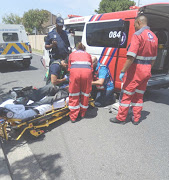 Cape Town authorities called for calm on Tuesday after a baffling incident in which six residents collapsed within minutes of each other.

Five of the six remain in a critical condition in hospital after collapsing on Monday near Wetton Circle. They are believed to have been poisoned by something they ate or drank.

"We do not want to speculate on the possible cause until blood tests or clinical samples have been completed and interviews with those affected have been conducted," said  Zahid Badroodien, Cape Town's mayoral committee member for health.

Investigations of this nature take time to complete, he said, advising the public and the media to allow for the police investigation to run its course so that the victims and their families can be provided with “concrete answers”.

Western Cape police spokesperson Lt-Col Andrè Traut told SowetanLIVE's sister publication TimesLIVE that no criminal case had been opened. "Lansdowne police will be looking into the matter to determine the circumstances," he said, adding that an inquiry "had been registered for this purpose".

ER24 spokesperson Russell Meiring said on Monday that it was not known if the victims were related or knew each another.

Cape Town law enforcement spokesperson Wayne Dyason said: “City law enforcement officers on patrol in Wetton were alerted to an incident in which three males and one female had collapsed at a bus stop.”

They received medical attention on the scene from paramedics, and “one of them was experiencing convulsions”.

Just as the paramedics were treating them, it was reported that another person was lying on the pavement in Walnut Road and a sixth on the corner of St Joseph’s and Wetton roads.

All six were treated on the scene and taken to hospital.

Other media outlets have reported that the victims consumed food and drink that was given to them for free from a vehicle driving through the area, but TimesLIVE has not been able to confirm this.