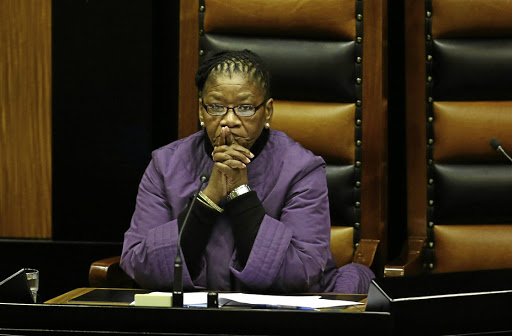 National Assembly speaker Thandi Modise says her family were denied the opportunity to bid her sibling farewell before he died in the Taung District Hospital. /ESA ALEXANDER

National Assembly speaker Thandi Modise says she was targeted by staff at a North West public hospital who prevented her from visiting her brother, while other visitors were allowed in.

Modise said staff at the Taung District Hospital made her wait at reception, telling her to come back during visiting hours, while other visitors walked in and out of the hospital.

"In the morning [of December 26] we drove to the hospital. We got to the hospital around 9am and went through the routine when you arrive at hospital and already at the time there were people arriving and people leaving the hospital having seen their relatives," Modise said.

"As we came in, we were walking behind other people."

Her nephew asked at reception if they could go in, but staff responded by saying they "must go back to the gate, it's not visiting time".

She argues that this was a fallacy as other visitors continued to arrive and others were leaving after seeing relatives.

After waiting at reception for 30 minutes, Modise was allowed to the ward after calling North West MEC of health Madoda Sambatha for help.

In an unprecedented step, one of parliament's most powerful presiding officers has been nominated to serve on the Judicial Service Commission (JSC), ...
News
3 years ago

'No warrant of arrest' for Modise skipping court date

There is no warrant of arrest for National Assembly speaker Thandi Modise, her office said on Friday. This comes after reports that the regional ...
News
3 years ago

In the meantime hospital staff tell a different story and accuse Modise of ill treating nurses during her Boxing Day visit.

This week staff downed tools, demanding justice for one of the nurses they say was at the receiving end of Modise's wrath.

However, Modise said this was not true. "It's actually not true, I only spoke to one nurse in the ward, this thing is a lie."

Modise admitted to having clashed with one nurse after she found her brother with a drip sucking his blood.

Modise said the nurse dismissed her concerns, saying there was nothing wrong with the drip. "You see, at some point I was a medical officer in one of the military camps of the ANC, I know a little bit. So, I said 'no man, you can't say that'. "But this nurse insisted there was nothing wrong with the drip and he added 'in any case it was not prescribed'."

Modise said this was the only nurse she clashed with and she admitted to telling him he "lacked bedside manners" and that she took his name and asked him about his training.

She said when the hospital CEO arrived with the chairperson of the hospital board, she complained about the drip and the CEO looked at it and apologised. Ben Modise died a day after the incident.

The National Council of Provinces (NCOP) will discuss and educate members of the public against violence targeted at foreign nationals, chairperson ...
News
3 years ago

Modise said she was not the only family member made to wait as her other brother also had to wait at the same facility, only to be allowed in when Ben had died.

"He said had he been allowed to walk in 30 minutes earlier, he may have been able to bid goodbye to his little brother," said the grieving Modise.

"This is what makes me angry, that I asked one nurse about the drip and now I am accused of harassing them.

"I also don't think we should shut up because in the ANC we have been preaching about how people must have access to quality healthcare. If we keep quiet because we are black and these things happen in black hospitals we are not doing ourselves a favour.

"My brother is gone but there are other patients who will still go through this."

Modise described her family as "very simple people" who use public facilities "including public schools and hospitals".

"My brother was a businessman, and I'm sure he was able to go to a private hospital, but as the Modises in the North West, we are simple people, we use public facilities."

Nurses' union Denosa provincial chairperson Motlalepula Maikepa declined to comment on the matter, saying the issue was still under investigation.

But Maikepa said the hospital staff was not on strike and that they merely had "a morning gathering" on Thursday and went to work after lunch.

North West health department spokesperson Tebogo Lekgethwane said they haven't decided on an investigation yet but confirmed that Denosa would meet with Sambatha tomorrow.