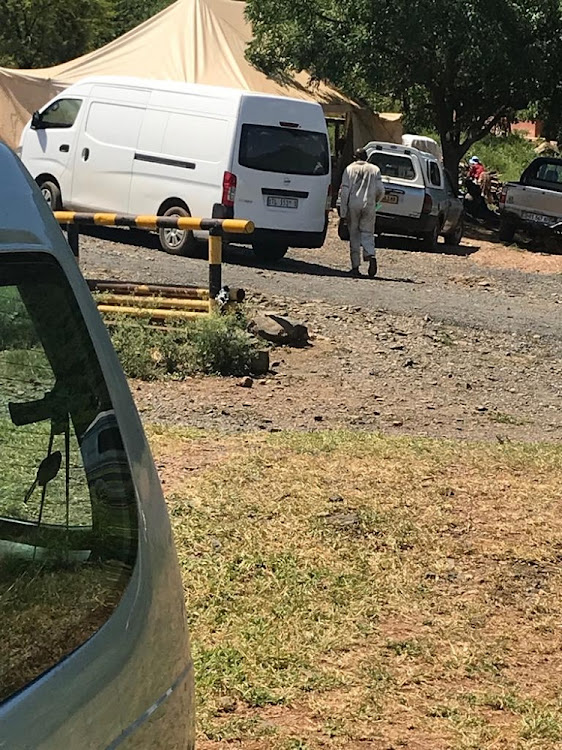 Members of the police bomb squad at the entrance of the Lilymine outside Barberton in Mpumalanga inspecting where the blast took place.
Image: Supplied

Former Lily mine workers believe they are on course to retrieve the remains of their three colleagues after they discovered what they believe are parts of the container the trio were in when it plunged underground in 2016.

The workers, community members and relatives  have been searching for Pretty Nkambule, Solomon Nyarenda and Yvonne Mnisi, who disappeared in the mine four years ago.

Now the group from Barberton, Mpumalanga said they have found the tyres, poles and a five metre fence which they believe supported the container the three were in when they perished. The group said they hope to find the trio's remains by February 5, which will mark the fourth anniversary of the tragedy.

“Though we see progress, our lives were threatened when we got stuck underground after rocks blocked our way on January 7. So far, we've found tyres which supported the container, poles and a fence on Thursday. This means we are making progress," the spokesperson of the miners, Harry Mazibuko said.

Former Lilymine workers searching for three miners who have been missing since 2016 | 📽️ by Mandla Khoza pic.twitter.com/MRkGPI2smj

"Our aim is to find the remains by February 5, which marks the day of the incident having the remains of our colleagues. The community is helping us with food and we are using our old gear to protect ourselves underground,”

During the collapse, 76 employees who were on duty on the day were rescued through a shaft window, while the container with the three disappeared.

Rescue and recovery missions were abandoned after the soil proved too unstable and collapsed again. Later, the mine owners, Gold Fields pleaded poverty to continue with any further search and recovery action .

The former employees, community members and families of the three miners have been camping outside the mine's gate since April 30 last year, as part of the Workers Day commemoration proceedings.

Mazibuko also said the same day they were trapped someone tried to kill them by trying to throw an explosive device at the tent they slept in.

“We believe someone wants us dead because we are making progress in this case. We survived after a person threw a bomb at the tent, but it hit tree instead. The police say this bomb can dismantle a car, which means it was deadly,” said Mazibuko.

“Whatever is bringing us closer to getting the bones of our children, we support. These young men and women have been asked by us as families because we can see the mine owners and government are not interested in finding our children,” said Mnisi.

Former mineworkers of the collapsed Lily Mine outside Barberton in Mpumalanga say they are making progress in finding their three colleagues who were ...
News
2 years ago

‘We are ready to help recover bodies’

Former Lily Mine employees and community members are ready to join the families in their quest to find the three who are still trapped at Vantage ...
News
2 years ago

A large group of former Lily Mine workers have gone underground to search for three colleagues who have been trapped since 2016.
News
3 years ago
Next Article