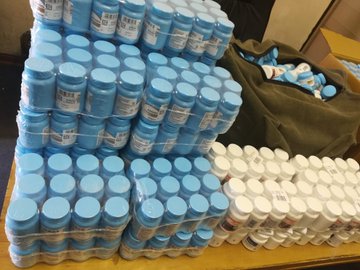 Free State police are investigating the alleged theft of anti-retroviral medication, after seizing a boot-load of drugs in Bloemfontein.
Image: SAPS

A large quantity of HIV pills were found in the boot of a BMW, covered with a blanket, at the Bloemfontein railway station.

The vehicle was registered in the Eastern Cape.

Two suspects were arrested on Thursday for being in possession of boxes and bags full of antiretroviral tablets, with brands such as Atroiza, Odimune and Tribuss, said Free State police Brigadier Motantsi Makhele. “The total number of bottles containing the ARV tablets is 1,068.”

Makhele said the two suspects are a 33-year-old man alleged to be an employee of the department of health based at a clinic in Lady Grey, in the Eastern Cape, and another man, aged 45.

A case of possession of suspected stolen property was opened.

When he was diagnosed with HIV at 21, Durban-based Simiso Msomi thought that was the end of his life and he would not live to see his 30th birthday.
News
2 years ago

About 800 Tshwane Aids community health workers have been left in the lurch without jobs after the city terminated their contracts and appointed new ...
News
2 years ago
Next Article