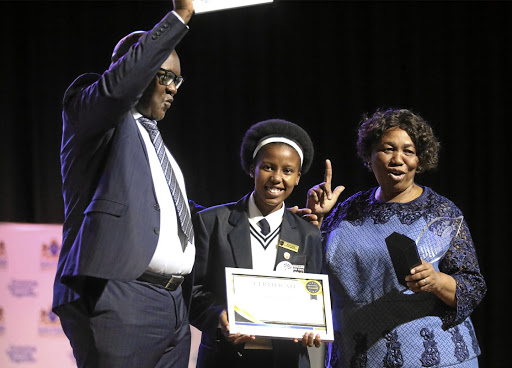 Dynamite comes in small packages and this cliché could be true for 19-year-old Kabo Tladi who was announced the top performing girl in township schools in Gauteng.

The petite girl from Makapanstad outside Hammanskraal, who did her grade 12 at Sikhululekile Secondary School, Tshwane North, also came top in the secondary school improvement programme.

She was one of the Gauteng top achievers.

There was ululations and singing as she walked to the stage for the third time to collect her awards.

"I am excited, but this shows that hard work pays. I started preparing for my matric after I had finished writing my grade 11 final results.

As my friends were excited about small things like partying or going to the malls, I made books my main priority," she said.

She said what pushed her to study hard was to make her parents proud.

"I come from a disadvantaged background and we did not have a lot at home.

"I could not manage to buy some school resources, but it truly helped that there was internet at school and I managed to do my research," she said.

Tladi plans to study astrophysics at the University of Cape Town.

Astrophysics is a branch of space science that applies the laws of physics and chemistry to explain the birth, life and death of stars, planets, galaxies and other objects.

Another big winner on the day was Tsheola Pasca, 19, from Filadelfia Secondary School in Soshanguve for pupils with special education needs, who was awarded the Harry Gwala Award for outstanding achievement.

"I was a bit shocked when they called my name. They have already called many categories and I did not think my name would also be called.

"Writing matric final exams was a bit challenging as we did not have quality brailles. As a result other classes had to sacrifice their machines in order for us to write our exams and there was also a shortage of question papers," he said.

Pasca plans to study for an LLB at Wits University.

Iviwe Matikinca of St Stithians College, Johannesburg, was among thousands of IEB matriculants who beamed with pride when they received their results ...
News
1 year ago

Angie Motshekga congratulates 'best of the best' from class of 2019

Minister of basic education Angie Motshekga has voiced her satisfaction with the matric class of 2019.
News
1 year ago
Next Article