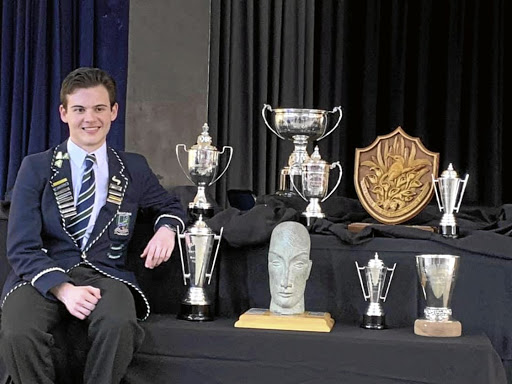 Religious leaders crucified him on social media, art lovers offered him jobs and support, and now the examiners have given him just 1% short of a perfect score for his “satanic” artwork.

Richards Bay matriculant Gary Louw, who was caught up in a social media storm over his controversial matric art exhibition, scored 99% for art.

“I feel gratified for receiving that mark for art. To a certain extent you could view it as poetic justice, that after all the persecution and controversy surrounding my matric art exhibition that I could be vindicated in that way.

“I am really happy. I always thought I would score highly for my art as I always knew the value of my art,” Louw told SowetanLIVE's sister publication TimesLIVE.

A KwaZulu-Natal north coast matric pupil, whose art is at the centre of a social media outcry, on Wednesday said the sketches and sculptures were a ...
News
2 years ago

Despite the social media ruckus on the eve of his final examination last year, the Grantleigh College pupil came out on top with marks that put him in the top 1% of the highest achievers in the country for physical sciences, English, art, mathematics and life orientation.

Louw achieved eight distinctions and was also just 1% short of a perfect score for maths.

His “only disappointment” was the 88% he scored for life sciences.

Louw is also the top pupil at his school.

Gary Louw is a remarkable young man. Our Dux of 2019 did us proud in the Final IEB Examinations, securing 8 distinctions...

A video in which a Richards Bay pastor, Andrew Anderson, lambasted the school for allowing the pupil to display his “satanic” artwork went viral.

The pupil's artwork includes sculptures of heads with horns, paper maché using Bible pages and paintings which reference The Last Supper and The Creation of Adam. Some of the paintings use a character who is similar to Ronald McDonald.

Louw has defended his work, saying the artworks in this exhibition explore the “commercialisation of contemporary organised religion as well as the monetary exploitation of the faithful by greedy individuals who hide behind the guise of the church or similar pious institutions”.

Louw told TimesLIVE on Wednesday that he had sold some of the pieces to a private buyer for close to R60,000 and had starred in a documentary entitled Gary Louw: Crucified Again which is set to be released on social media this month.

He plans to study physics and astrophysics at the University of Cape Town while pursuing art professionally.

“I am in talks with galleries to showcase my art,” he said.

“We would like to extend our congratulations to Gary as well as to the entire Grantleigh matric class of 2019 for all their hard work and dedication. Gary’s, as well as Grantleigh’s, 2019 matric results are a testament to the commitment that our learners show towards their future. I know they spent many hours burning the midnight oil and it clearly shows.

“There are many challenges that arise throughout a matric year, and our learners can be proud for facing these head-on,” he said.

The Black Aesthetics exhibition and creative discourse around it was undoubtedly one of the few significant cultural landmarks this year.
Opinion
2 years ago
Next Article