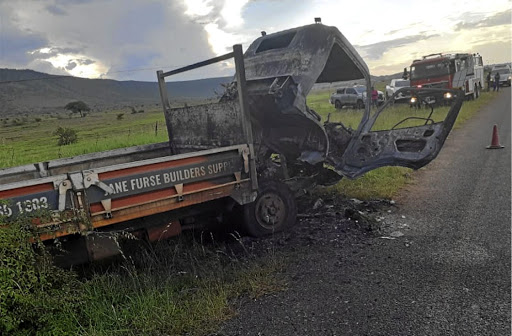 The delivery truck that was petrol-bombed near Jane Furse, resulting in one of the occupants burning to death.
Image: Thomo Nkgadima

Kagiso Mphelane was killed when a vehicle he was travelling in was petrol- bombed, allegedly by striking colleagues in Jane Furse, Limpopo.

The 30-year-old man was with two assistants in a Jane Furse Builders Supply delivery truck when the incident happened on Friday.

Kagiso's father, Judy Mphelane, 53, said he was saddened and frustrated by the untimely death of his son, saying he was expecting a lot from him.

He appealed to police to arrest those involved in the killing, urging them to follow up on information and claimed that one of the two suspects who petrol-bombed his son left his cap at the scene.

"One of the suspects whose cap was left at the scene was caught by CCTV footage picketing on the day of the attack in front of the gate of Jane Furse Builders that morning," Mphelane said.

Jane Furse Builders Supply financial manager, Mohammed Mia, confirmed that there was an ongoing strike related to wage negotiations that employees were taking part in.

Durban mayor Mxolisi Kaunda has appealed to police officers not to use their weapons to deal with personal issues. This after a metro policeman was ...
News
1 year ago

He also confirmed that two Toyota Hilux bakkies belonging to Jane Furse Builders Supply were set alight while parked at its employees' homes.

Mphelane said he received a phone call informing him about the incident from one of his neighbours who was working with his son.

General Industrial Workers Union of South Africa leader Kagiso Phesane had not responded to requests for comment at the time of going to print.

Limpopo police spokesperson Brig Motlafela Mojapelo said they cannot rule out the possibility that the incident could be linked to the ongoing strike by more than 300 employees, which resulted in some being dismissed.

In November, the house of Jane Furse Builders Supply manager Joyce Nkoana was burnt down in Phokwane village.

Three trucks were also torched during the strike that has lasted for more than three months.