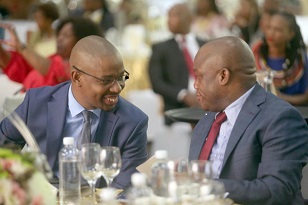 KwaZulu-Natal education MEC Kwazi Mshengu and premier Sihle Zikalala were full of smiles after the announcement of the province's results on Wednesday.
Image: Rajesh Jantilal

KwaZulu-Natal - home to the largest number of matriculants - has registered its highest matric pass rate yet.

Education MEC Kwazi Mshengu commended the class of 2019 for the improved pass rate, up from 76.2% in 2018 to 81.3% in 2019, at the provincial matric results announcement in Durban on Wednesday.

A total of 116,937 candidates sat for the final exams in the province.

“This is a historic achievement since the 1994 democratic breakthrough, as this pass percentage for NSC exams is comparable to none in the past.

“The 80% target has finally been reached and today we proudly join the league of other provinces who are in the 80% bracket,” said Mshengu.

Mshengu added that despite several incidents of violence in schools in 2019, the pass rate had improved.

“The year 2019 was very difficult for the education sector. We had to contend with many factors that were inhibiting our progress,” he said.

Free State MEC of education Tate Makgoe has declared that his province's target this year is to exceed 90% pass rate in matric results.
News
2 years ago
Next Article