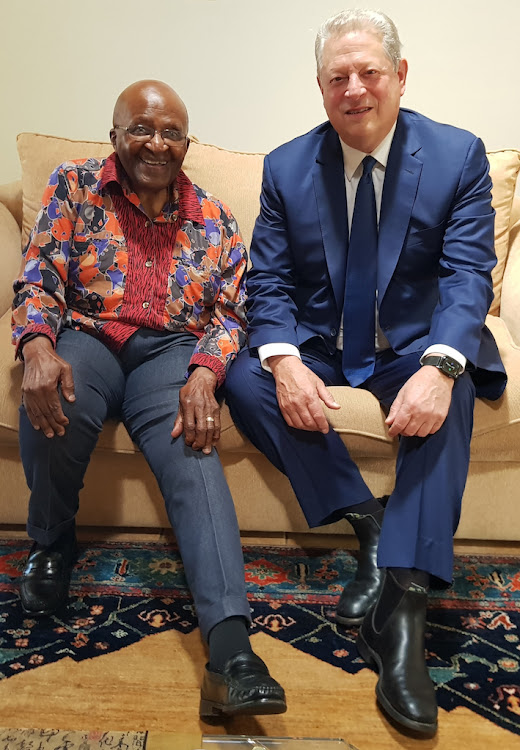 Tutu and Gore met in a gathering facilitated by the Desmond & Leah Tutu Legacy Foundation in Cape Town on Tuesday.

They called on those who have continued to invest in fossil fuels to urgently commit to clear and “actionable” plans to shift their investments to renewable sources of energy.

“Investing in renewable energy systems and research would provide the necessary impetus to drive down costs and increase demand for clean energy,” said the foundation in a statement.

“Any organisation committed to operating responsibly in this new decade has a moral imperative to stop participating in financing the destruction of human civilisation’s future and to instead invest in renewable sources of energy,” said Tutu and Gore.

"That is particularly important for institutions that aspire to provide leadership in our society and to become a part of the solution to the climate crisis."

As SA student activists did in the 1980s during the anti-apartheid campaign and before that in the 1960s during the US civil rights movement, young people around the world in the 2020s are urging bold action to sharply reduce pollution and irrevocably turn away from the previous century’s dependence on fossil fuels, said the foundation.

The foundation became a signatory of the fossil fuel divestment campaign in 2014.

In an article in The Guardian at the time, the archbishop wrote: "Just as we argued in the 1980s that those who conducted business with apartheid South Africa were aiding and abetting an immoral system, we can say that nobody should profit from the rising temperatures, seas and human suffering caused by the burning of fossil fuels."

Responsible investments and why we should care

With various corporate governance scandals unfolding and environmental disasters and social ills threatening economic growth, you may be wondering ...
Business
2 years ago

The Centre for Environmental Rights has applied to be a friend of the court in case in which the City of Cape Town is seeking to be allowed to ...
News
2 years ago
Next Article