Three bust with drugs worth R400,000 as police raid in Chatsworth 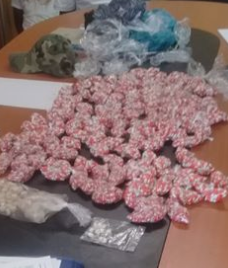 Some of the drugs seized during the raids.
Image: SAPS on Facebook.

Three alleged drug peddlers were arrested and drugs worth R400,000 seized by police in raids in Chatsworth, south of Durban, on Friday.

Police said that two suspects had been arrested during an operation conducted by the provincial drugs and firearm unit together with Point task team in Havenside Drive in Bayview, Chatsworth.

“They were following up information about the suspects who have a drug storage at a certain house in Havenside. Upon entering the house a search was conducted and heroin capsules were recovered from the suspects. The drugs were ready to be distributed to the sellers,” police said.

Two suspects, aged 35 and 37, were placed under arrest. One of the arrested suspects was out on bail for the similar offence, they added.

“Further investigation was conducted at Saffron Road where a 65-year-old man was found in possession of drugs. Various drugs like heroin capsules, 98 Mandrax and 10 packets of cocaine. The total number of heroin capsules recovered is 13,000.”

Police said the estimated street value of the recovered drugs was R400,000.

The suspects were charged for possession and dealing in drugs. They are expected to appear in the Chatsworth magistrate’s court on Monday.

“These operations show that we are leaving a mark on the criminal network. This arrest also shows that we are eager to arrest all those who are dealing with drugs in our province,” said KwaZulu-Natal provincial police commissioner Lt-Gen Khombinkosi Jula.

More than 750 suspects, many of them on the run, have been arrested in Gauteng since the start of the festive season.
News
2 years ago
Next Article