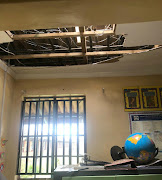 Image: Supplied Four armed men gained entry through the roof of the Umlazi primary school after assaulting a security guard.

A security guard was seriously injured during a robbery at a primary school in Umlazi, south of Durban, on Sunday.

Police said the security guard, from Ntwela Primary school in Umlazi F section, was on duty when he was attacked.

“It is alleged by the complainant that on December 29 2019 at 3am, he was performing his duties at a school in F section in Umlazi when he was attacked by unknown males,” said SAPS KZN spokesperson Capt Nqobile Gwala.

Gwala said the guard sustained injuries to the head as a result of being assaulted with a gun. The men then broke into the principal’s office through the roof and took a grass cutter, a laptop, a TV set and a DVD. A case of robbery is being investigated by Umlazi police.

The KZN education department said in a statement on Friday that the stolen items had been recovered by members of the community.

“As a department, we are saddened to hear that school property was vandalised and that items were stolen. Fortunately, what is encouraging is that members of the community took it upon themselves to investigate the matter and found the goods belonging to the school at the home of one of the suspects,” read the statement.

“We wish to express our heartfelt gratitude for the bravery shown by community members. This confirms that education is a societal issue as opposed to it being viewed as a matter of the department. Communities and government need to work together to curb crime in schools,” added MEC for education Kwazi Mshengu.

The department said the guard's condition was "very serious" and he was receiving treatment in hospital.