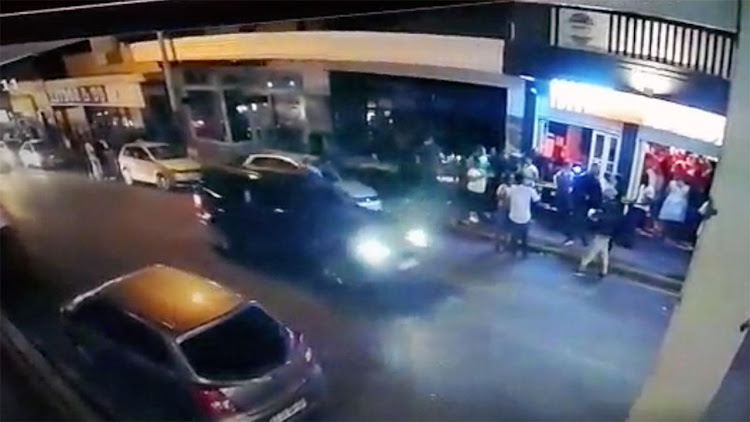 The moment before bullets flew outside a Johannesburg restaurant, where revellers were celebrating New Year's Day.
Image: Supplied

The shooting happened outside Poppy’s restaurant in Melville.

The footage shows patrons and people outside the establishment falling to the ground as the vehicle goes past slowly.

It was a bloody start to 2020 as two women were killed and six people injured in a drive-by shooting in Melville, Johannesburg, in the early hours of New Year's Day. CCTV captured the incident.

Police spokesperson Brig Mathapelo Peters described earlier how a BMW SUV approached from 7th Street and “suddenly, multiple shots were allegedly fired from the BMW at patrons who were sitting outside the restaurant”.

Gift Molaola, a car guard who spoke to SowetanLIVE's sister publication TimesLIVE at about 3am at the scene of the shooting, was on a corner opposite the restaurant. He watched as the SUV drove past slowly, then heard gunshots.

“All we heard was bah, bah, bah and then the car drove off. It was hectic.”

He said his friend, also a car guard, was among those shot.

Just after 3am the roads were swarming with police officers and paramedics. Many of the wounded victims had already been transported to hospital. But two women lay covered with space blankets on the ground.

Roads about the restaurant were cordoned off with yellow tape.

Peters confirmed on Thursday morning that the death toll remained at two.

“Police investigators are working about the clock,” said Peters. There have been no arrests.

Poppy's restaurant said in a statement on Facebook that it would remain closed to allow police to complete their investigation.

An off-duty police constable drew his service pistol and allegedly went on a shooting rampage after going to visit a friend and finding her with ...
News
2 years ago
Next Article