Despite fears, Centurion waste pickers forced to return to river site where friend died in floods 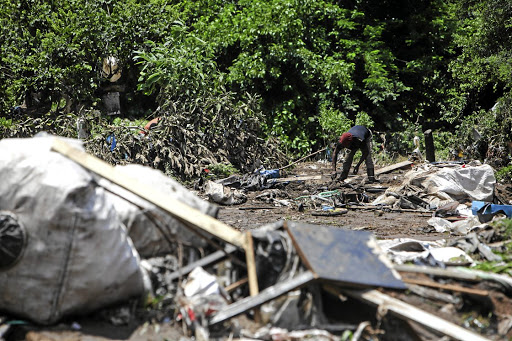 Despite their fears about returning to the place where they watched their friend Seboka Seboka die in the Tshwane floods at the beginning of the month, the majority of residents of Mushroom Compound are back living on the banks of the Hennops River.

This is after the closure of their temporary shelter.

David Qhoai, 24, from Leribè in Lesotho, Seboka’s home region, said he had nowhere else to go.

“I watched Seboka die. I'm very scared to go back but I don't have anywhere else to go. I will need to go back home first to get a new passport as the old one was washed away in the flood.”

Qhoai can make up to R300 a day recycling on the river bank, and sends most of it to his seven dependents at home.

Two people have lost their lives with hundreds displaced as a result of floods which have swept away over 700 shacks in Mamelodi, Pretoria.
News
2 years ago

Daniel Mabale, 40, from North West province, said he had been living at the compound for three years and was also planning on returning after the festive season.

Meanwhile, Seboka's family were desperate to get his body back home. Cheo Seboka, 32, distraught over the death of his older brother, said his family did not have the money to transport the body.

Heavy rains from early December left parts of Gauteng swamped but Centurion was the worst hit and the residents of Mushroom Compound were forced to seek higher ground on December 9 after the banks of the river burst.

Of the 130 “bagarezi” or informal recyclers, 75 destitute people were given two weeks' shelter at the Lyttelton community hall.

Bagarezi representative Stefan van der Westhuizen said over 80 members of the squatter camp had returned to the river banks.

In a recent investigation, the Council for Scientific and Industrial Research found that formalising waste pickers into Cooperatives and SMEs did not create sustainable jobs in SA, but had a failure rate of 91.8% - meaning nine of ten recycling cooperatives failed.

David Farquharson, councillor for ward 57 where the hall is located, said he had no knowledge about what was happening at the hall and referred TimesLIVE back to Van der Westhuizen.

Meanwhile, the compound has been the subject of a legal dispute since 2018, between the municipality and landowners Tony Petricevic and Andre Boshoff of Bluecore Trading, who plan to build a hotel on the land.

The landowners allowed the waste pickers back onto the property until the municipality finds a permanent home for them.

Bagarezi legal representative Louise du Plessis, of Lawyers for Human Rights, has been fighting for the residents to return to the banks of the Hennops because she said they had a right to earn a living and a constitutional right to food.

She said the issue was not about sending them back to a dangerous environment, but rather that the temporary land in Sunderland Ridge, an industrial zone proposed by the municipality as a temporary place of accommodation for three months, was 17km from where the community collected and sold their recyclables. She said the municipal bylaws also prevent the bagarazi from working in Sunderland.

But Vanessa Pillay from Wiego, a global network supporting workers in the informal economy, said the municipality was beginning to change its attitude towards informal recyclers.

On October 11, the city and the Bagarezi created a monthly forum to discuss how to work together.

Pillay has been working with the residents since 2017 when they were first threatened with eviction.

“Waste pickers save municipalities in SA around R750m a year in landfill space.

“They provide a service for the municipality ... but they get no recognition for the hard work they do. Instead they are treated like the stuff they collect.”

She said the reason Mushroom Compound was so important was because it was where the waste pickers worked and the high quality recyclables were worth a lot of money. Also, by staying in the area, they could keep an eye on their collections.

Petricevic said: “On the flipside, when we build the hotel we can create over 200 jobs in the area.”

He said the case had been postponed twice and had cost him four times what he had initially budgeted.

Farquharson said the municipality could not comment on the case as it was sub judice.

Meanwhile, the City of Tshwane, in a statement on Saturday, assured members of the community and the business sector in Centurion that the process to rehabilitate the Hennops River in the area would be intensified in the new year.

“The situation has worsened following the floods which have led to untreated sewer water entering the Hennops River,” said the city. “It has to be emphasised that the risk is ever present upstream beyond the municipal boundary with multiple cases of overflowing sewers and partially treated effluent being discharged into the river and its tributaries.

“In addition to the stench, there have been eyewitness accounts of dead ducks and fish.”

Volunteers who have organised cleanup operations were thanked by the city. “The post flood cleanup yielded close to 500 bags of debris scoured by over 40 volunteers.”