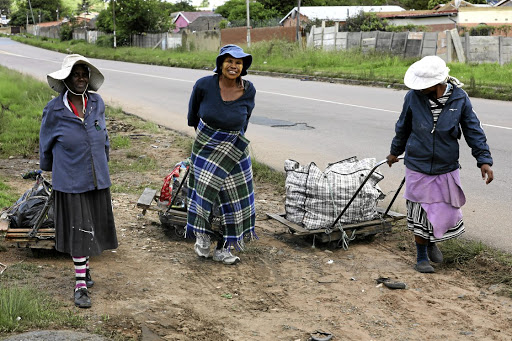 After losing her job as a domestic worker, Mmatumo Ramohaladi resorted to collecting waste to support her family and turned it into a profitable business.

Ramohaladi, 51, from Kliptown, Soweto, started recycling waste in 2015 with dozens other women in her area to put bread on the table in their homes.

"I had to swallow my pride and go around the townships and dumping sites to collect everything I could find because no one was gonna feed my children," said Ramohaladi.

She said she makes about R60 to R80 per load after it has been weighed in kilograms at the recycling hub.

"It's not much but I'm able to collect about four loads a week and on good days, I'm able to make about R250 to R300 in a week which I use to buy groceries."

Ramohaladi said she wakes up around 4am to go and collect bottles from taverns, places where there were events or parties.

"I collect bottles, plastic containers, wood, steel, metal, card box and anything I can find to trade.

"...I believe in education and they would rather not have nice clothes to wear at home but I make sure they have full and proper uniform when they go to school."

While many South Africans are preparing for the Christmas feast, celebrations and festivities are a luxury Ramohaladi has to do without.

Domestic workers will soon be able to claim for work injuries

Labour and employment minister Thulas Nxesi has promised that the Compensation of Injuries on Duty Amendment Bill, which caters for domestic workers, ...
News
1 year ago

A group of farm dwellers and workers protested in Port Elizabeth on Friday, demanding an end to farm evictions and other abuses against them.
News
2 years ago

"I have nothing much and in as much as I would love to celebrate it, I cannot afford it," she said.

"It's been over a decade that I haven't had a Christmas feast because of the little income, which pays for our basic needs."

Ramohaladi hopes one day her grandchildren will be able to work decent jobs and be able to afford luxurious things.

"I've taught them how to save and never waste money and they have seen how I hustle for them. My grandchildren understand that we are not poor but just less advantaged for now.

"They have never gone to bed on an empty stomach and that gives me peace," said Ramohaladi.

Another woman, Nteboheng Fosa, said she began recycling two years ago to help her husband who does casual jobs.

"We have three children and the income my husband brought home was not enough so I had to find a way to bring in another income.

"I've worked so hard this year to surprise my children for Christmas. I am getting them cellphones because I have been saving up for them since the beginning of this year," said Fosa.

She said her teenage children have respected and supported her and helped collect cans and bottles without being asked.

"My children take time on Saturday mornings after doing their chores to go everywhere they think they can collect bottles and cans.

"They bring me about two loads with the help of their friends."

Fosa said she only allows her children to help her on weekends to make sure they are not disturbed from their school work during the week.