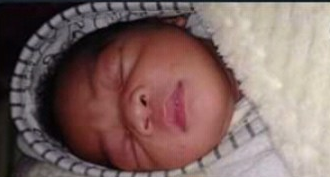 There is still no sign of Baby Sthandwa Dlamini.
Image: Supplied / SACCW

The mother of the teenage girl whose newborn baby was “abducted” in Pietermariztburg last month says she is doing everything she can to protect her daughter from feeling any more pain.

“I have taken all the baby clothes and I am keeping them in my room,” said Zama Dlamini. “She has been getting sick because of it. Just yesterday, she was battling stomach cramps.”

Dlamini told SowetanLIVE's sister publication TimesLIVE that she felt robbed of enjoying her chance to be a grandmother, adding that the incident had made her ill.

“I have just come out of the clinic, where they said my blood pressure is so high. But with all that we are going through, it is expected. I couldn’t even share with the nurses what this stress is, but I am struggling,” she said.

Three days after siblings Sunick Ferreira, 12 and Ashley Olivier, 5, went missing in Cradock, Eastern Cape police on Tuesday said they had been found.
News
1 year ago

Dlamini’s granddaughter, who was born on November 26, was four days old when a woman who had offered to the teenage mother with essentials walked off with the baby.

Baby Sthandwa had been taken to a clinic in Pietermaritzburg for her first check-up when the “abductor” approached the unsuspecting mother.

“She was at a clinic in Pietermaritzburg, taking her newborn baby girl for a check-up, when she was approached by an unknown woman dressed in a maroon dress. The suspect lured the mother to the shop to buy a certain dress, while asking to hold the baby,” said Mbele.

“She asked the mother to stand in the queue to make a payment. The suspect fled the scene with the baby.”

Another relative, Zinhle, said: “The woman had apparently said she works for a company that gives vouchers for nappies and milk for struggling new mothers. She convinced [the mother] to walk back with her to her offices, saying she needed to sign for the voucher. But on their way to the offices, the woman noticed a dress in the window of a shop and said she wanted to buy it.”

The woman picked out the dress and asked the unsuspecting mother to pay for it, while she fled the scene with the infant.

Zinhle said the police had informed them that CCTV footage showed the suspect interacting with other women with children before approaching Sthandwa's mother.

“[She] was too trusting, because the footage shows that she allowed the woman to hold her baby from the time they left the clinic together,” she said.

The family is clinging to hope that the baby will be returned unharmed.

Meanwhile, the police said they still had no leads.

“The child is still being sought by police. The matter is still under investigation,” said Capt Nqobile Gwala.

A 31-year-old man who was found guilty on 54 charges - including rape, kidnapping and assault - was slapped with 13 life sentences, plus 185 years' ...
News
1 year ago